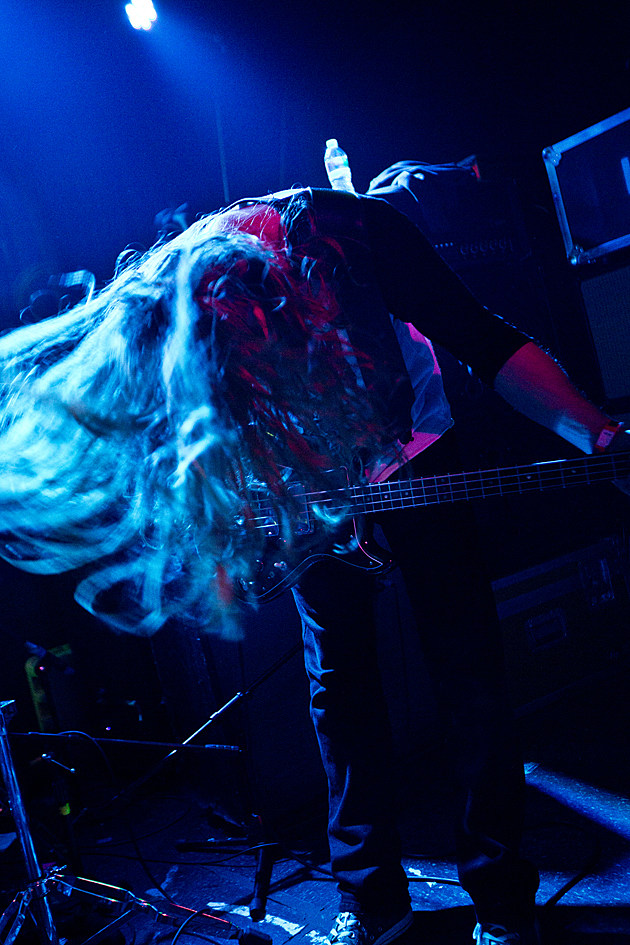 Floating Points, Paul Raffaele @ Music Hall of Williamsburg
UK producer Floating Points had been dropping quality EPs and singles for the past six years, and he recently got a band together to record his first full length, Elaenia, which came out yesterday on Luaka Bop. It's as much dance music as it is chilled-out jazz, and he'll have an eleven (!) piece band with him tonight to perform songs off of it.

Voices From the Lake, Patrick Russell, Mike Simonetti @ Good Room
Italian musicians Donato Dozzy and Neel have been making ambient music for a few years now as Voices From the Lake. Their only album so far is their 2012 self-titled debut (though they did put out a live album this year).

Kat Edmonson @ Joe's Pub
Jazz-pop singer Kat Edmonson has gained comparisons to Billie Holiday and the Brill Building, and she's not just inspired by the classics but she sings them too. She begins a 2-night run at Joe's Pub tonight (one show tonight, two tomorrow).

Cymbals Eat Guitars, Solvey, Painted Zeros @ Rough Trade
Cymbals Eat Guitars' LOSE was one of our favorite albums of last year, and the cathartic rock of this year's "Aerobed" single shows they aren't slowing down one bit. Tonight's show is good all around, with Solvey (solo project of Jessica from Zambri) and the Don Giovanni-signed Painted Zeros.

(Grateful) Dead & Company @ MSG
While the Grateful Dead's Fare Thee Well shows are behind us, three of the four core members (Bob Weir, Mickey Hart and Bill Kreutzmann) are continuing on as Dead & Company with John Mayer. This is their third of three MSG shows.

Phil Lesh and Friends @ Capitol Theater
The Grateful Dead's Phil Lesh wraps up his run at the Cap tonight, and this one's especially exciting because it has David Nelson of New Riders of the Purple Sage on guitar.

Judas Priest, Mastodon @ Prudential Center
Metal Gods Judas Priest have been doing it for over four decades, and their live shows still kick major ass. Even last year's new album (which basically sounds like their early '80s period) is pretty good. They picked quite a strong support band too, Mastodon. Tonight's the third of three NYC-area shows.

Murs, Red Pill, King Fantastic @ The Studio at Webster Hall
Rap veteran Murs returned with the new album Have a Nice Life this year, and his tour in support of that makes its way to NYC tonight.

Wolf Eyes, Yellow Tears, Dreamcrusher @ Trans-Pecos
Wolf Eyes have made it pretty clear that they're done with noise music, and this year they released the new album I Am A Problem: Mind In Pieces, which is a highly trippy record sometimes indebted to proto-metal. Tonight's the release show, and support comes from Hospital Productions' urine-soaked Yellow Tears and "nihilist queer revolt musik" noisemaker Dreamcrusher.

YOB, Black Cobra, Kings Destroy @ The Marlin Room at Webster Hall
YOB released one of 2014's best doom/sludge albums with Clearing the Path to Ascend, and they're back in town to support it once again. Both openers tonight are great too.

The Dirty Nil, Witch Coast, Fat Heaven, Home Lives @ Shea Stadium
Canada has been producing a lot of driving, fun punk acts lately and The Dirty Nil are no exception. They recently signed to Dine Alone and they're working on a new record with producer Goodmanson, so maybe we'll hear some new stuff tonight.

The Story So Far, Basement, Turnover, Morningside Lane @ Starland Ballroom
We're not huge fans of the headliner, but we definitely think it's worth catching Run For Cover labelmates Basement and Turnover. The former is a UK band that recalls Seattle grunge, and the latter make ethereal jangle pop. This tour doesn't hit NYC but it's in NJ tonight and hits Long Island tomorrow.

Neil Hamburger, Nick Flanagan @ The Bell House
Phlegmatic Borscht Belt yukkster Neil Hamburger is from the Tony Clifton school of high-concept anti-comedy. Every joke's a total groaner and we think he's a treasure.

Richard Buckner, Vincent Cross @ Union Hall
Long-running alt-country singer Richard Buckner may not have gotten as big as some of his Merge labelmates (you may remember one of Arcade Fire's earliest NYC shows was with him) or some of the people he's influenced (like Bon Iver), but he's consistently kept it, releasing his tenth album Surrounded last year.

Howard Jones @ IridiumHaving played that weird "I Love the '80s" show at the Theatre of MSG the night before, Howard has his own show, not backed by a cover band, tonight.