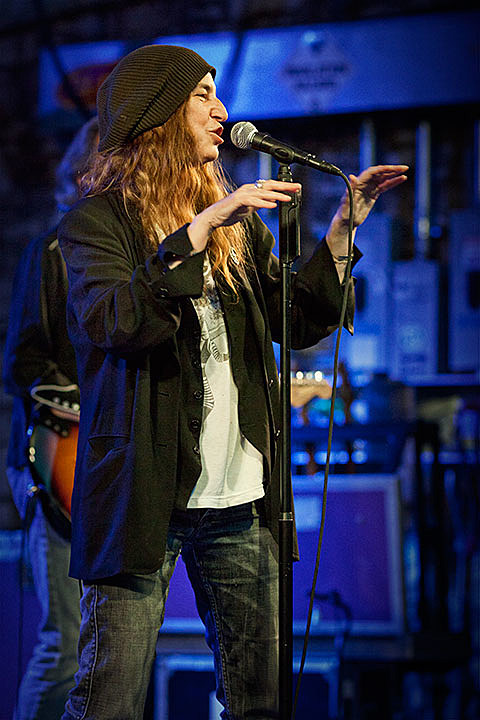 Patti Smith & Her Band @ Beacon Theater
It's been 40 years since Patti Smith's still-fantastic and highly influential debut Horses came out. She played it in full in Europe earlier this year, and now she'll do the same in her hometown of NYC.

The Charlatans, Eyelids, Dinowalrus @ Webster Hall
While most of their Madchester brethren are but a memory (or doing nostalgia tours) The Charlatans have kept going though triumph and a couple tragedies and have an amazingly consistent discography, including this year's Modern Nature.

NY Comedy Festival
It's the start of this year's NY Comedy Fest with shows all over the city. Tonight's big show is the annual Stand Up for Heroes show at Madison Square Garden with Chris Botti, Seth Meyers, John Oliver, Ray Romano, Bruce Springsteen, Jon Stewart and Surprise Guests.

Natalie Prass, Loamlands @ Music Hall of Williamsburg
Natalie Prass (once a member of Jenny Lewis' touring band) is young but her music seemingly comes from a different era, recalling Dusty Springfield or even pre-rock pop.

Surfer Blood, Ski Lodge @ Rough Trade
Like JEFF the Brotherhood, Surfer Blood quickly followed indie success with signing to Warner Brothers, only to find it not such a good fit and back on their own. Their Joyful Noise-released new album, 1000 Palms, came out earlier this year.

Eleanor Friedberger (The Fiery Furnaces), Icewater @ Union Pool
With a new label and a New View (her first LP for Frenchkiss, due in February), Eleanor Friedberger is playing two small NYC shows this week to give folks a taste of what's to come. Tonight's the first.

The Britanys, Acid Dad, Triathlon, Tall Juan @ Baby's All Right
It's a night of fuzzy psych-pop headlined by Brooklyn quartet The Britnays who bring powerpop smarts to their low-fi sound.

Cake Shop Comedy @ Cake Shop
If you miss Big Terrific and Hannibal Buress' Sunday night show at Knit, and are looking for a new free, weekly comedy show that happens in a rock club and sometimes has big name talent stop by unexpectedly, "Cake Shop Comedy" might do the trick.

Buddy Guy @ B.B. King's
Born in Louisiana but schooled on Chicago Blues as part of Muddy Waters' band in the '60s, where he was also a house musician for Chess Records. A true legend.

Fred Thomas, Bonny Doon, Mighty Clouds @ Elvis Guesthouse
Saturday Looks Good To Me frontman Fred Thomas put out a new solo album this year, All Are Saved, which has him working in a stripped-down, highly lyrical style. It's good stuff.

Minus the Bear, Murder By Death, Aero Flynn @ Irving Plaza
Minus the Bear have been loving the 10-year anniversary tours lately. They already did Highly Refined Pirates and Beer Commercials, and now they're doing 2005's Menos El Oso. That album lives up quite well today, so tonight should be a fun show.

Bombers, Malthusian, Blood Tsunami, Studfaust, Bell Witch, Luminous Vault @ Saint Vitus (Martyrdoom)
It's the final day of the Martyrdoom festival at Saint Vitus, and among the lineup is Seattle doomers Bell Witch whose Four Phantoms is one of the better albums in that realm released this year.