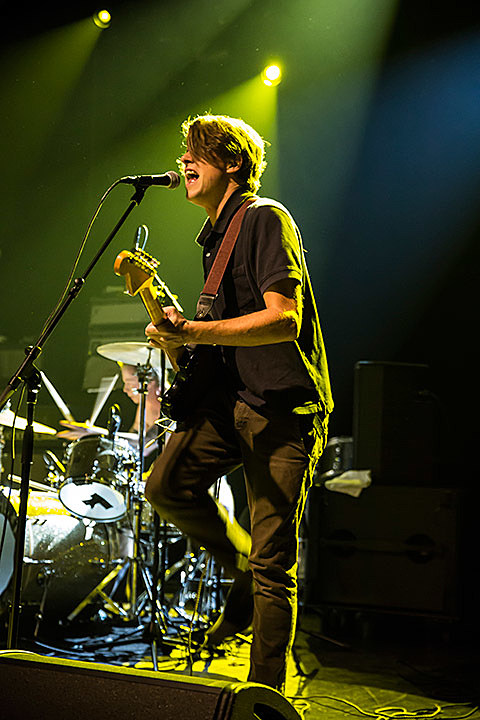 Wand, Junk Boys, Pollen @ Mercury Lounge
LA group Wand have released two albums this year -- the fuzz-overload Golem, and the more nuanced, melodic 1000 Days -- both of which are great. They are seriously good, and seriously loud, live. This is Wand's first of two NYC shows this weekend.

EL VY (Matt Berninger of The National and Brent Knopf of Menomena), Wye Oak, Julien Baker @ Bowery Ballroom
EL VY is the new collaborative project of The National frontman Matt Berninger and former Menomena / current Ramona Falls member Brent Knopf. It's no tossed off side project though -- if you're a fan of either band you'll probably dig this too. Tonight's show is great all around, with the ever-evolving Wye Oak and promising young singer/songwriter Julien Baker.

U.S. Girls, ESCAPE-ISM @ Alphaville
U.S. Girls, aka Meg Remy, made her 4AD debut this year with the terrific Half Free, her most refined -- yet still highly charged -- set of songs yet. This is her first of two NYC shows with Ian Svenonius' "found-sound dream drama" project ESCAPE-ISM. Sold out.

Made of Oak, Tuskha @ Baby's All Right
Nick Sanborn, who you may know as half of Sylvan Esso (and Megafaun before that) dabbles in glitchy, ambient electronica with his new solo project, Made of Oak. Tuskha, meanwhile, is Phil Moore of Bowerbirds who here makes danceable, R&B influenced pop.

Lemonade, Teen Commandments, My Body @ Cameo Gallery
We're in the last two weeks of Cameo's existence on N. 6th St, and tonight it's a band who's played there many times, Brooklyn dance duo Lemonade.

Yonatan Gat, Monogold, Cotillon, New Rips @ Palisades
Yonatan Gat is very much a "see it live" musician, as he and his band's style -- usually set up on the floor and highly improvisational -- can be described (as I have before) as in-your-face. If you're ok with that, his shows are highly recommended.

Odesza, Rufus Du Sol, Kasbo @ Terminal 5
Seattle dance duo Odesza seriously blew up. It was just over a year ago you could see them at places like Santos Party House and Knitting Factory, and tonight they're on night 2 of a 3-night run at the huge Terminal 5 and the whole thing is sold out.

Scott Kelly, Bruce Lamont, Kevin Hufnagel @ The Acheron
Neurosis' Scott Kelly and Yakuza's Bruce Lamont just released a new album together with their Corrections House project, but their tour has them playing separate solo sets. Maybe we can expect a little collaboration though? Kevin Hufnagel (of Dysrhythmia and the current Gorguts lineup) opens.

'Mad Tiger' premiere @ IFC Center
Part of the DOC NYC fest, this documentary goes behind Peelander-Z's flying kicks and action comic riffs. Both Peelander-Yellow and former member Peelander-Red will be in attendance for a post-screening Q&A.

Boots, Technoself, Thatkidprolific @ Rough Trade
Boots has done a lot of great work with Beyonce, FKA twigs and Run the Jewels, and now he's got his own album out too.