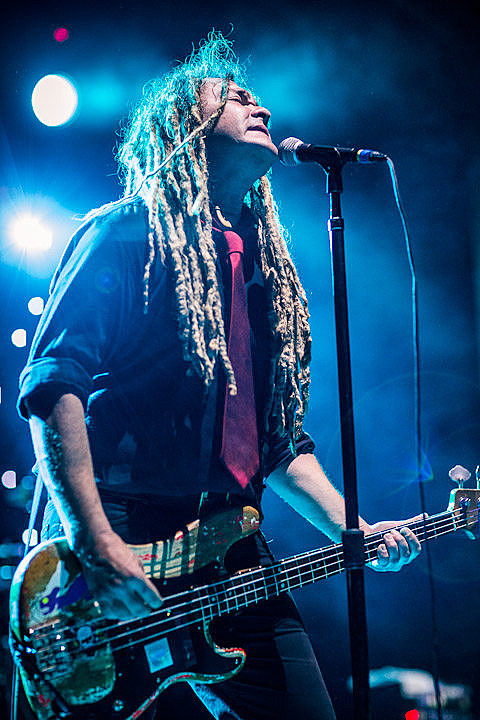 Nada Surf, Slothrust @ Webster Hall
For over 20 years, Nada Surf have been making smart, heartfelt indie rock. New year will be the 20th anniversary of their debut album and should see a new record on the way as well. The band say they'll be dusting off some lesser-played songs tonight.

EL VY (Matt Berninger of The National and Brent Knopf of Menomena), Wye Oak, Mina Tindle @ Music Hall of Williamsburg
EL VY is the new collaborative project of The National frontman Matt Berninger and former Menomena / current Ramona Falls member Brent Knopf. It's no tossed off side project though -- if you're a fan of either band you'll probably dig this too. Tonight's show is great all around, with the ever-evolving Wye Oak and French art pop artist Mina Tindle. UPDATE: Julian Baker is now opening this show instead of Mina, like she did at Bowery Ballroom last night.

NY Comedy Festival
The NYCF continues and Saturday highlights include: A Sit-Down With The Tonight Show Writers at The TimesCenter; Judd Apatow and Friends (including Mike Birbiglia) at Carnegie Hall; Trevor Noah at Town Hall; Kumail Nanjiani at NYU Skirball Center; and more.

U.S. Girls, ESCAPE-ISM, 999Reversus @ Babycastles
U.S. Girls, aka Meg Remy, made her 4AD debut this year with the terrific Half Free, her most refined -- yet still highly charged -- set of songs yet. This is her second of two NYC shows with Ian Svenonius' "found-sound dream drama" project ESCAPE-ISM.

Elysian Fields @ The Owl
Venerable NYC band Elysian Fields are celebrating their 20th anniversary with a run of shows where they're performing their entire catalog live. Tonight it's 2009's The Afterlife.

Nobunny, David Peel, Crazy and the Brains @ Palisades
Speaking of wild and wooly good times, Nobunny shows are generally anything goes, especially at a venue like Palisades.

Wand, Operator @ Rough Trade
LA group Wand have released two albums this year -- the fuzz-overload Golem, and the more nuanced, melodic 1000 Days -- both of which are great. They are seriously good, and seriously loud, live. This is Wand's second of two NYC shows this weekend.

A.C. Newman (Carl Newman), Hrishikesh Hirway @ The Greene Space
Tonight, AC Newman takes part in a live taping of podcast "Song Exploder" where "musicians take apart their songs, and piece by piece, tell the story of how they were made." Sold out.

Dilly Dally, LVL UP, Turf Durt @ Baby's All Right
Toronto's Dilly Dally make indie rock in the tradition of the Pixies/Breeders (and the Nirvana songs that those bands inspired), and Katie Monks' raging vocals and a super-tight rhythm section are no small part of why their live shows always rip. Tonight's the first of two NYC shows on this tour.

Chandra @ Rough Trade
Chandra Oppenheim led the NYC no wave band Chandra back in 1980 at the age of 12. Now she's bringing the project back on tour with help from Toronto band Bile Sister, members of New Chance, Century Palm, and Jay Holy, and original Chandra guitarist Steven Alexander. This is a free afternoon day show, and then...

A Tribe Called Quest reissue release party feat. Ali Shaheed Muhammad (DJ Set), Q-Tip (DJ Set) & appearances by Phife & Jarobi @ Santos Party House
There's no word on whether or not all of A Tribe Called Quest plan to perform together at this show like they did on Fallon last night, but they'll all be in the house so who knows what will happen? It's a release party for the reissue of their classic debut, People's Instinctive Travels and the Paths of Rhythm.

The Men, Wild Moth, PC Worship @ The Acheron
This is a cool show all around, with local punks-turned-jammers The Men, San Francisco's shoegazy punks Wild Moth, and local avant-punks PC Worship.

Class Actress, Starchild and The New Romantic @ Cameo Gallery
Cameo closes for good next weekend and for their last week the venue are having some of their favorite artists, including Class Actress who has been quiet of late.