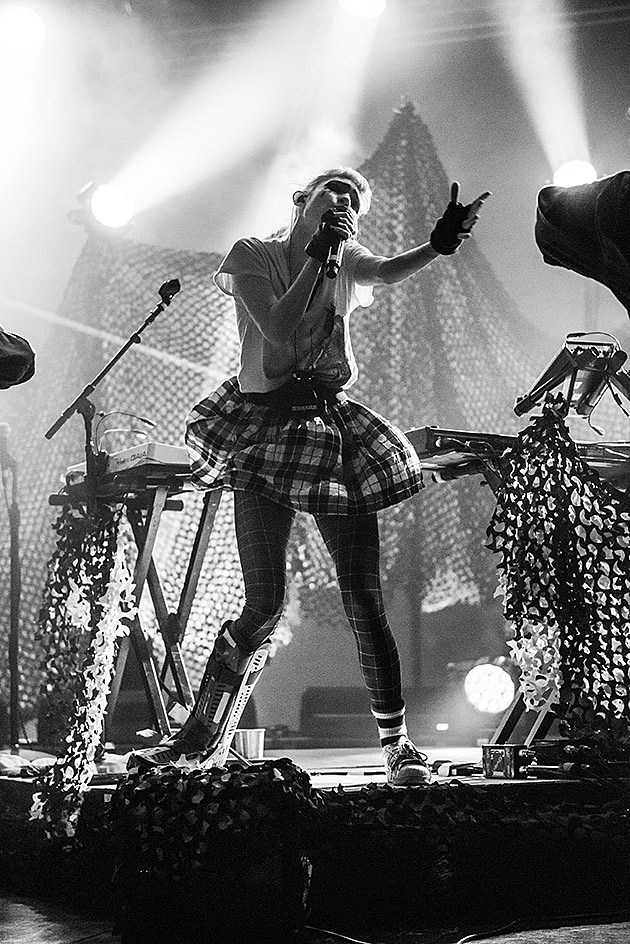 Grimes, Nicole Dollanganger @ Terminal 5
Grimes' new album Art Angels is in some ways a natural progression from Visions but it also explores a ton of new ground. It's great stuff and it sounds like it's gonna be very fun live. Opening is Nicole Dollanganger, who Grimes recently signed to her new label.

The Weeknd, Banks, Travi$ Scott @ Madison Square Garden
The Weeknd is bigger than ever -- perhaps you've heard "Can't Feel My Face" in a car or a bar or a party or just about anywhere else -- and tonight he plays his second of four NYC-area arena shows.

Dilly Dally, Wives @ Mercury Lounge
Toronto's Dilly Dally make indie rock in the tradition of the Pixies/Breeders (and the Nirvana songs that those bands inspired), and Katie Monks' raging vocals and a super-tight rhythm section are no small part of why their live shows always rip. Tonight's the second of two NYC shows on this tour.

Wild Moth, Perfect Pussy @ Elvis Guesthouse
It was fun while it lasted but live music at Elvis Guesthouse will be a thing of the past after tonight. (They aren't closing, just no more bands.) They go out with a bang, though, with shoegazy San Francisco punks Wild Moth and noisy locals Perfect Pussy.

Danava, Monolord, Tower @ Saint Vitus
Two doomy bands, Danava and Monolord, have been on tour supporting Windhand. That tour already included a big NYC show at Gramercy Theatre, and now they're set to hit the smaller Saint Vitus on their own.

Jerry Seinfeld, Amy Schumer @ Beacon Theatre
Jessica Seinfeld's Baby Buggy organization, which "takes an innovative child-focused approach to curbing generational poverty by linking access to critical child gear items to parental participation in programs designed to lift the family out of poverty," celebrates its 15t anniversary tonight with this benefit show. They put together quite the double bill.

Shamir, Hana, Frances Rose @ Bowery Ballroom
Shamir has had a good year, releasing his critically-acclaimed (and very fun) debut album and, this week, two nights at Bowery Ballroom. Tomorrow's is sold out but there are still tickets available for tonight.

Half Moon Run @ Rough Trade
Montreal's Half Moon Run fall somewhere between Fleet Foxes' forrest folk, and the more anthemic side of Radiohead, a sound they've further refined on new album, Sun Leads Me On.