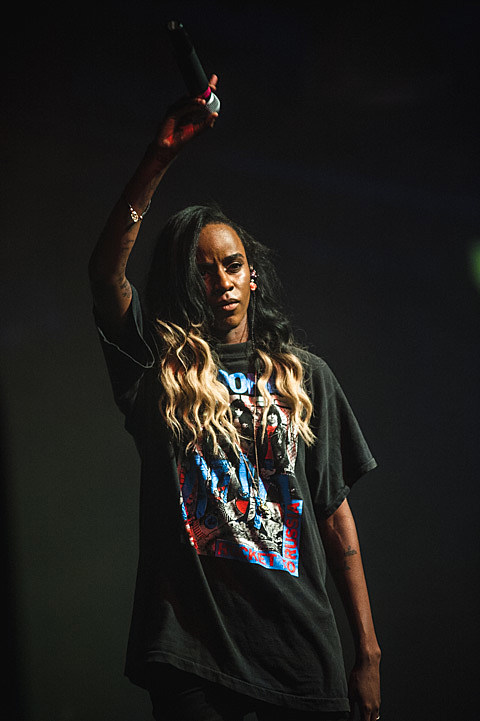 Angel Haze, Stella, Show Tufli @ S.O.B.'s
Angel Haze went a bit more pop on her official debut album Dirty Gold than most people wanted her to, but she got back to her hard-edged roots on her recent mixtape, Back To The Woods.

KRS-One @ S.O.B.'s
It's a good day to just spend your whole night at SOB's. After the Angel Haze show, South Bronx legend KRS-One plays the release party for his new album Now Hear This. Going by the early singles, he's as furious as ever.

HIYA WAL ÂALAM feat. Olof Dreijer (of The Knife), Amina Hocine, Wolkoff @ Knitting Factory
While The Knife are no more, Olof Dreijer has teamed up with the band HIYA WAL ÂALAM as a member and the producer of their forthcoming album. That's not finished yet, but we can get a taste of what it might sound like tonight.

Wild Nothing, Alex G @ Baby's All Right
Fans of reverby pop will enjoy tonight's double bill of Wild Nothing and Alex G. It's the only US date this year scheduled at the moment for both bands. While Alex G has a brand new album on Domino, it's been a while since we've heard new music from Wild Nothing. Maybe they'll fill us in on what's going on.

Okkervil River @ Bowery Ballroom
Okkervil River's acclaimed album Black Sheep Boy turns 10 this year and the band are celebrating with a tour where they're playing it live in full. This is the final of three nights at Bowery Ballroom. Tickets are still available.

Nik Turner's Hawkwind, Hedersleben, Netherlands, Dinner @ Grand Victory
Sax and flute man Nik Turner was a member of Hawkwind in the '70s and '80s and now fronts his own version of the Spacerock pioneers. His backing band, Hedersleben, gets their own opening set.