photo: Superchunk in Chicago in 2014 (more by Jeff Ryan) 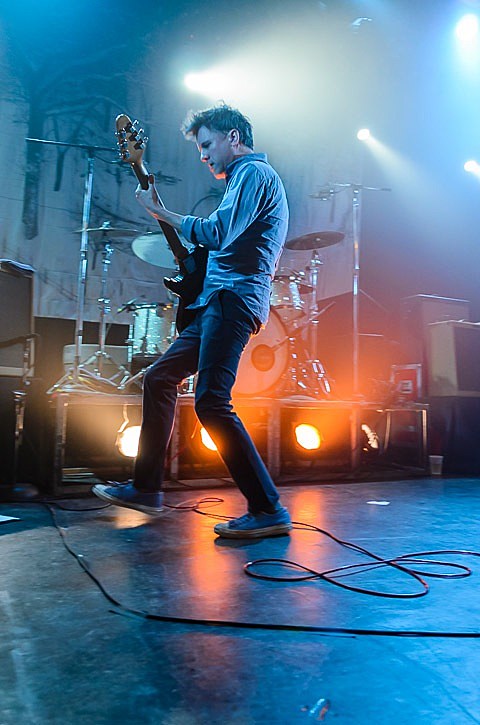 Superchunk, All Dogs @ Baby's All Right
Having just played the big Ground Control Touring anniversary extravaganza, Superchunk are sticking around tonight for this show, one of the smallest joints they've played in some time. With no new album to plug, either, this should make for a very fun setlist. Openers All Dogs are worth getting there early.

The World Is A Beautiful Place & I Am No Longer Afraid to Die, Foxing, TTNG, Brightside @ MHOW
TWIABP and Foxing both released two of the very best rock albums of this year, with Harmlessness and Dealer, respectively. Both exist somewhere between indie rock, post rock, and emo, with strings, horns, keys, and more gorgeous layers to flesh things out. Good openers tonight too.

Curren$y, Bodega Bamz, Youth Soul Love, Jimi Tents @ Irving Plaza
New Orleans rapper returned earlier this year with the third installment in his Pilot Talk series, and it had his laid-back stoned raps sounding good as ever. This week he puts out a second full length release of 2015, Canal Street Confidential. Needless to say, he'll have no lack of material to pull from tonight.

TOKiMONSTA, Two Fresh, Anderson Paak @ Rough Trade
EDM producer TOKiMONSTA wraps up a two-night run in NYC tonight, and she'll be joined by her collaborator Anderson .Paak, whose profile rose a lot after he was prominently featured on Dr. Dre's new album.

Agnostic Front, Antidote, Hammer and the Nails @ Saint Vitus
NYHC legends Agnostic Front put out their eleventh album this year, The American Dream Died, which sounds more or less how you'd expect an Agnostic Front album to sound (not a bad thing). Tonight they celebrate Vinnie Stigma's birthday with this show.

Boot Camp Clik, Buckshot, Smif-N-Wessun, Black Moon, Da Beatminerz, O.G.C. @ B.B. King's
Venerable hip hop label Duck Down celebrates its 20th anniversary with this show, and they've got plenty of regulars on board. Should be a great night all around.

Lame Drivers, Dares, Big Quiet @ Union Pool
It's a great night of local indie rock, headlined by long-running band Lame Drivers who just put out the terrific Chosen Era. Openers Big Quiet are of the jangly variety and made their debut album with producer Mitch Easter.

Gag, Narcoleptics, Pleasure Industry, JJ Doll, Barbed Wire @ Alphaville
Olympia hardcore band Gag are a force to be reckoned with, and if you don't believe us you just have to see 'em live.

Spector, Little Racer, Slonk Donkerson @ Mercury Lounge
UK band Spector have picked up some buzz in their home country for a sound that's not far removed from Editors. Tonight's their second of two NYC shows this week.