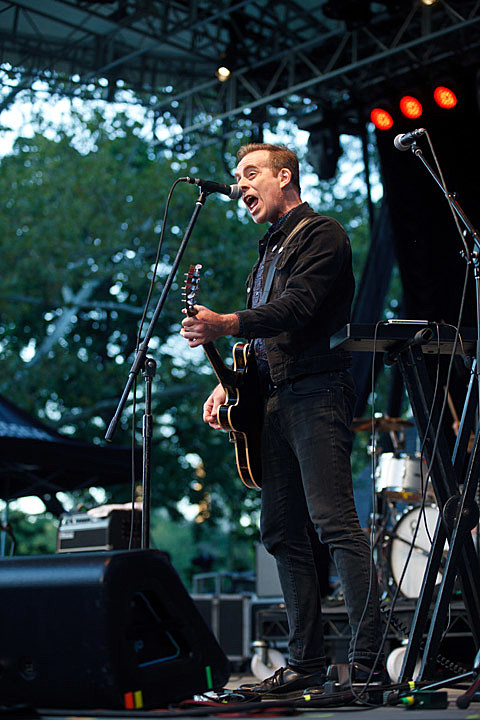 Blood Orange @ Baby's All Right
Before his two sold-out shows on Saturday at The Apollo, Blood Orange will warm up tonight at Baby's. It's a full band show and hopefully we'll get the "special guests" they're promising for the Apollo shows, too. (This was the "secret show" we had listed here previously.) $10 at the door, 7 PM.

The Aimee Mann & Ted Leo Christmas Show w/ Liz Phair, John Roderick, Jonathan Coulton, & special guests @ Town Hall
The impressive lineup of Aimee Mann, Ted Leo, Liz Phair, John Roderick and Jonathan Coulton are out on a tour together, collaborating and playing holiday songs (like "Why Can't I Wreath"). With even more special guests promised, it sounds like a very good time. This is their first of two NYC shows.

The Get Up Kids, Into It Over It, Rozwell Kid @ Bell House
The Get Up Kids, whose punky take on emo influenced both the mainstream boom in the 2000s and the current revival, are celebrating their 20th anniversary. Tonight wraps up their two-night stand in NYC (followed by a NJ show). Good openers too: Into It Over it, the project of Evan Weiss (a guy who literally bridges the gap between 1990s and 2010s emo), and the Thin Lizzy-esque Rozwell Kid.

DJDS (Jerome LOL & Samo Sound Boy), Venus X, Suicideyear @ Music Hall of Williamsurg
Jerome LOL and Samo Sound Boy teamed up a few years back as DJ Dodger Stadium (now it's just DJDS) and last year they released their debut album, Friend of Mine, which had them injecting a lot of emotion and personality into electronic music. They put out a couple new singles this year, which continued that trend.

I'm With Her: Sara Watkins, Sarah Jarosz & Aoife O'Donovan; Kate Davis @ Bowery Ballroom
Sara Watkins has been busy lately, playing shows as a member of Nickel Creek and Watkins Family Hour (featuring Fiona Apple). Now she's playing with yet another proejct, I'm With Her. For this one, she's joined by singer/songwriter Sarah Jarosz and Aoife O'Donovan (Crooked Still, Sometymes Why). Tonight's their first of two NYC shows this week.

Strand of Oaks, Reigning Sound @ Cannon's Blackthorn
Since making the move from a folk singer to a full rock band, Strand of Oaks has continued to rise. Tonight they play a benefit for the Tommy Brull Foundation, and it's a great double bill with garage rockers Reigning Sound.

Jen Goma, Psychic Twin @ Manhattan Inn
Jen Goma plays in such bands as A Sunny Day in Glasgow, People Get Ready and has spent time in The Pains of Being Pure at Heart, too. Tonight she plays her own music under the name SHOWTIME. Free with $5-10 suggested donation.

White Pisces, The City and I, New Rips, Language @ Palisades
This is a good bill of local-ish rock, with White Pisces (ex-Street Smart Cyclist, Slow Warm Death), The City and I (mem Mannequin Pussy), and more.