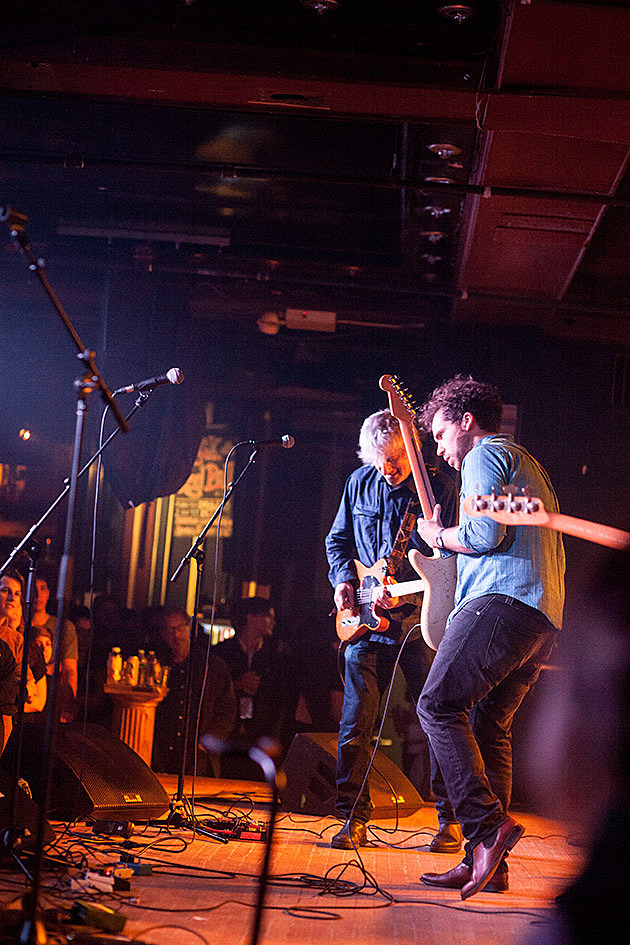 Kevin Devine, Tigers Jaw, Matthew Caws (Nada Surf), Meredith Graves (Perfect Pussy), Cymbals Eat Guitars, Laura Stevenson, Owen @ Bell House
Everyone on this show (except Laura Stevenson) contributed to Kevin Devine's split singles series that he gradually rolled out this year. We're not sure what exactly to expect when they all come together tonight, but we're excited (and proudly presenting this show).

Joanna Newsom, Alela Diane & Ryan Francesconi @ Apollo Theater
Joanna Newsom's new album Divers is yet another winner, and the new songs fit in perfectly with the old favorites (which we got a lot of at her Kings Theatre show earlier this week). Ryan Francesconi pulls double duty tonight, as a member of Joanna's band and also opening with Alela Diane. Their set is not to miss.

Parquet Courts, Pill @ Warsaw
Parquet Courts new EP, their first record for Rough Trade, has more in common with Metal Machine Music than the punky, jammy shout-a-longs on their more recent LPs, but you can expect a typically energetic show tonight. Go early for the skronky, in-you-face sax attack that is Pill.

Modern Baseball, Jeff Rosenstock, Tiny Moving Parts, Sorority Noise @ Webster Hall
Modern Baseball have been working on a new album, and early reports seem to indicate it's a noticeable progression. We're looking forward to hearing it, but in the meantime, tonight they'll probably play all the ones we already know, and it's gonna be a good time as alway. Jeff Rosenstock's shows are also nothing but good times, and the two other openers are worth catching too.

Hamilton Leithauser, Jack and Eliza @ Baby's All Right
With the Walkmen all but officially broken up, frontman Hamilton Leithauser took a slightly more adult turn on his old band's signature sound with last year's solo debut, Black Hours. We might get some new songs tonight. Sold out.

Patrick Watson, Timber Timbre (solo) @ Irving Plaza
With a distinctly Montreal blend of pop, classical and cabaret, Patrick Wilson's music is as widescreen as it gets. The dark folk of fellow Canadian Timber Timbre makes this a good double bill.

Andrew W.K. (solo show), Darren Keen, Rats Mouth @ Knitting Factory
As you know, Andrew WK and Christmas go hand in hand, and this is the eighth year he's done a solo holiday tour. This promises an AWK that is "up-close, intense, and partier than ever."

The Figgs, Doug Gillard @ Bowery Electric
Saratoga Springs power pop trio The Figgs are one of the most underrated bands of the last 20 years, bringing tight musicianship, catchy songs and a genuine sense of fun to their shows. Tonight's their annual holiday show which is one of the best times to see them. The great Doug Gillard opens.

Sara Watkins, Sarah Jarosz, Aoife O'Donovan; Michael Daves @ Music Hall of Williamsburg
Sara Watkins has been busy lately, playing shows as a member of Nickel Creek and Watkins Family Hour (featuring Fiona Apple). Now she's playing with yet another proejct, I'm With Her. For this one, she's joined by singer/songwriter Sarah Jarosz and Aoife O'Donovan (Crooked Still, Sometymes Why). Tonight's their second of two NYC shows this week.

Elvis Perkins @ Berlin
Elvis Perkins focused on his soft folky side for this year's I Aubade. Tonight he kicks off a two-night run at Jesse Malin's new-ish East Village club Berlin.

Nightmare of You, Brian Bonz @ Bowery Ballroom
After The Movielife broke up, guitarist Brandon Reilly embraced his love of The Smiths and wrote the self-titled debut album for this then-new band Nightmare of You, which turns 10 this year. To celebrate its anniversary, they're playing the album in full tonight and original drummer Sammy Siegler (also of Judge, CIV, Youth of Today, etc) will be in tow for this show.

Foster Care, Running, Uniform @ Union Pool
Garage punk bruisers Foster Care are, along with Pampers, one of the best NYC bands in their field. This whole bill is pretty great if you like this kind of stuff, with Chicago's Running playing as well.

Z100's Jingle Ball feat. The Weeknd, Fetty Wap & more @ MSG
You probably want to avoid Z100's annual super-lame Jingle Ball (especially with so many good shows tonight), but there is some cool stuff on the lineup like The Weeknd and Fetty Wap.