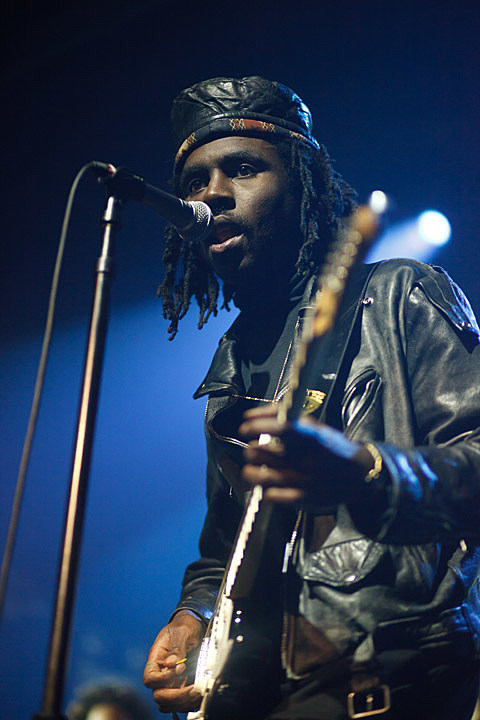 Blood Orange and friends @ Apollo Theater
Not counting the warm-up show at Baby's on Thursday night, it's been a year and a half since Blood Orange has played a full band show in NYC. He plays two today, with lots of special guests (Kindness, Le1f, Junglepussy, Ratking and some unannounced) and proceeds going to charity. Both sold out.

Sleater-Kinney, Torres @ Kings Theatre
Sleater-Kinney made a triumphant return this year, coming back after a ten-year hiatus with a killer new album and live shows that were electric as ever. They wrap up this year with five more NYC shows, starting tonight. Each has a different opener, and tonight it's Torres, whose Sprinter was another winner this year.

The Aimee Mann and Ted Leo Christmas Show with Jonathan Coulton, Liz Phair, John Roderick and very special guests @ Music Hall of Williamsburg
The impressive lineup of Aimee Mann, Ted Leo, Liz Phair, John Roderick and Jonathan Coulton are out on a tour together, collaborating and playing holiday songs (like "Why Can't I Wreath"). With even more special guests promised, it sounds like a very good time. This is their second of two NYC shows.

Hop Along, Radiator Hospital, Des Ark @ Bowery Ballroom
Hop Along had been one of the busiest and best bands in indie rock's underground for a few years, and this year they put out their first release on a big label (Saddle Creek) and finally started getting the recognition they deserve. (Tonight's 500-cap show is sold out.) Radiator Hospital take a similar approach to blending indie rock, folk, pop and punk, and they're a great band in their own right. The darker/quieter Des Ark is too.

Brooklyn Rock Lottery @ Knitting Factory
A bunch of musicians from notable bands will be divvied up into "groups" today, then they'll spend the day writing and rehearsing original songs which they'll then perform at this show with proceeds going to Daniel's Music Foundation. Musicians include Luke Jenner of The Rapture, indie rock vet Doug Gillard, Autre Ne Veut's Arthur Ashin, members of Swans, The Hold Steady, Tokyo Police Club and more.

Shellshag, Downtown Boys, Vacation, Bad Canoes @ The Bell House
Long-running regulars of the local DIY scene, Shellshag released their fifth album Why'd I Have To Get So High? this year on Don Giovanni and they're celebrating it tonight. It's a good (all-Don Giovanni) bill all around.

Lady Leshurr, Jubilee (Mixpak), HDBeenDope @ Gramercy Theatre
Following some collaborations with Orbital and Basement Jaxx, UK rapper Lady Leshurr started getting much-deserved attention for her own material when her video for "Queen's Speech Ep. 4" started going viral. It's gotten some Azealia Banks comparisons, and it feels about as exciting as when "212" first dropped. Tonight's her NYC debut.

Mirah (w/Harsh Crowd) @ Ace Hotel
The always-great singer/songwriter Mirah plays a collaborative show today with Harsh Crowd, "a band comprised of four 13-year-olds who met at Willie Mae Rock Camp for Girls two summers back." It's one of Ace Hotel's '5 at 5' shows, which means it starts at 5 PM and they'll play five songs.

Gun Outfit, The Men, B Boys, Scully @ Alphaville
Gun Outfit's new album Dream All Over is punk in spirit but psychedelic folk/slowcore in sound. It's good stuff, and tonight's their second of two NYC shows in support of it. It's especially good, because Brooklyn punks/jammers/country rockers The Men areo on it too.

Elvis Perkins @ Berlin
Elvis Perkins focused on his soft folky side for this year's I Aubade. Tonight he wraps up a two-night run at Jesse Malin's new-ish East Village club Berlin.

The Get Up Kids, Into It. Over It. Rozwell Kid @ Starland Ballroom
The Get Up Kids, whose punky take on emo influenced both the mainstream boom in the 2000s and the current revival, are celebrating their 20th anniversary o this tour. Good openers too: Into It Over it, the project of Evan Weiss (a guy who literally bridges the gap between 1990s and 2010s emo), and the Thin Lizzy-esque Rozwell Kid.

Jim Gaffigan @ Madison Square Garden
Known as the "clean" comedian who talks about food, Jim Gaffigan is nonetheless hilarious (his sitcom ain't bad either) and he plays his biggest hometown show ever tonight.

It's also SANTACON, so approach wobbly folks in red and green holiday attire with caution, if at all.