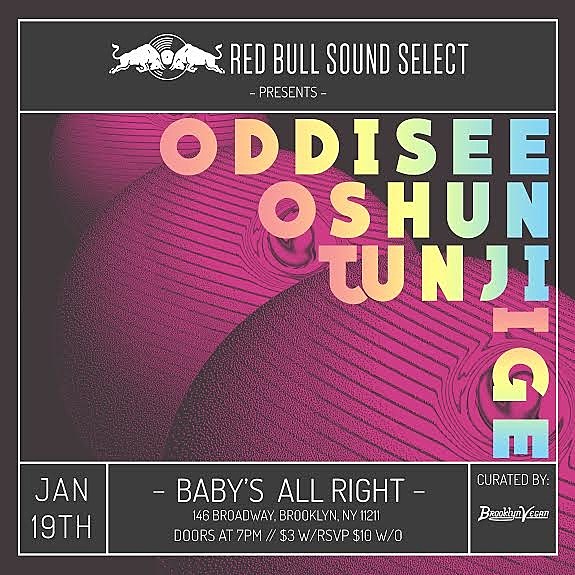 Oddisee, OSHUN, Tunji Ige @ Baby's All Right
This is the next BrooklynVegan-curated installment of Red Bull Sound Select, and needless to say, we're very excited about this lineup. Oddisee had one of our favorite indie-rap albums of last year with The Good Fight, newcomers OSHUN put out the very promising (and deeply impactful) ASASE YAA mixtape, and Philly raper Tunji Ige got a profile boost thanks to his appearance on Christine & the Queens' album. The show is $3 at the door with RSVP or $10 without, and either way entry is first come, first served. Doors at 7 PM. Hope to see you there?

Brian Fallon (of The Gaslight Anthem) @ The Studio at Webster Hall
Gaslight Anthem frontman Brian Fallon is planning a solo album for this year, and while it's not out yet, early singles suggest it's up a similar alley to Gaslight's slowed-down Get Hurt. Tonight's show is sold out, but Brian plays a larger NYC show in March.

Tindersticks 'The Waiting Room' screening @ Rough Trade
Tindersticks new album, The Waiting Room, is also a full-length film featuring segments directed by Claire Denis, Christoph Girardet, Pierre Vinour, and more. The film makes it's world premiere at this screening which is followed by a Q&A with Tindersticks frontman Stuart Staples. To attend, you need to buy a copy of the new album at Rough Trade.

Steve Earle, John Doe @ City Winery
Steve Earle is a consummate singer-songwriter and storyteller and is always worth seeing, especially in an intimate setting like this. Making this even better: X singer/guitarist John Doe.