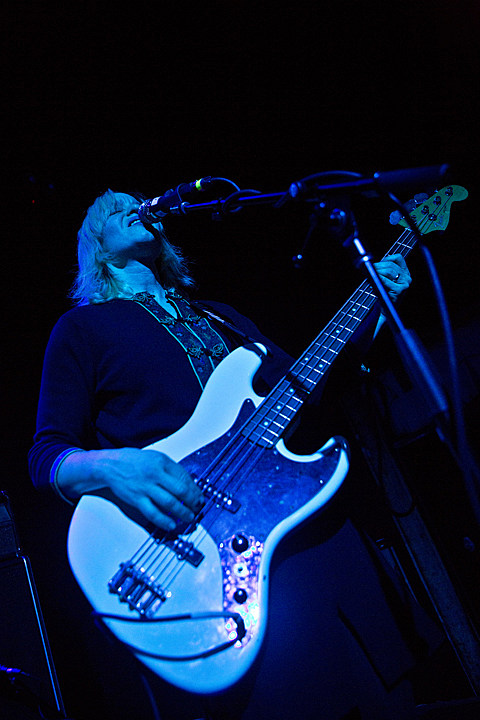 Winter Storm Jonas walloped NYC... almost everything is canceled tonight. You can check out snow cancelation post, but also you may want to check the venue before you head out. You can browse our full NYC show calendar for all of tonight's shows, but here are some highlights...

The Besnard Lakes @ Rough Trade
The Besnard Lakes are from Montreal and are not afraid of snow. They're also ready to celebrate the release of their terrific new album A Coliseum Complex Museum. This is a free show: doors are at 1:30 PM with the show at 2. Worth trudging through the white stuff to see.

A Place to Bury Strangers, Guerilla Toss, PC Worship, Pill @ Market Hotel
It's the second night of Market Hotel's Grand Reopening, tonight with a fun lineup of Brooklyn rock acts: noise addicts APTBS, the chaos that is Guerilla Toss, avant-indie mainstays PC Worship and skronky Pill. It's $10 at the door. UPDATE: Canceled due to the storm.

I Am The Avalanche, Timeshares, Make War @ Music Hall of Williamsburg
The Movielife's reunion marches on later this year, but meanwhile singer Vinnie Caruana's other band I Am the Avalanche have two sold-out Brooklyn shows this weekend. Also worth catching is Long Island's twangy punks Timeshares. UPDATE: MHOW tweeted, "Tonight's I Am The Avalanche show has been postponed to Sat Jan 30. All tix will be honored or refunds available at point of purchase."

Cut Chemist @ Output
Veteran turntablist Cut Chemist has been at it for over two decades, working with Jurassic 5, DJ Shadow, Edan, and a handful of others.

Worriers, Big Huge, Likers, YJY @ Shea Stadium
Brooklyn punks Worriers are still riding high off last year's great Imaginary Life on Don Giovanni, which mixes the personal, the political, and a ton of hooks. UPDATE: Canceled due to the storm.

Pop.1280, Sediment Club, Bambara @ Alphaville
If you like your post punk on the gothy side, this show is for you with Pop. 1280's near-industrial howl, and Bambara who sound like decedents of The Birthday Party. UPDATE: Tonight's show is CANCELED.

The Men, No Ice, Junk Boys @ Aviv
Tonight's the 6th annual memorial show for The Brooklyn What's Billy Cohen who died from cancer in 2010. Headlining are the ever-changing The Men who have, apparently, been recording new material. UPDATE: tonight's show is postponed.

Bayonne, Eddi Front @ Baby's All Right
You may remember Austin electronic musician Roger Sellers who released the dreamy and danceable Primitives back in 2014. He now goes by Bayonne and is rereleasing Primitives this year. UPDATE: tonight's show is cancelled.

Those Darlins, Idle Bloom @ Baby's All Right
Those Darlins are going on indefinite hiatus after this tour, so you may want to check out their country-fried rock one last time. UPDATE: tonight's show is postponed.

Psychic TV, Shilpa Ray, Wetware, Voodoo Medicine Man @ Trans Pecos
Psychic TV are releasing their entire PTV3 catalog of albums and singles digitally through "the usual outlets" on January 22. In celebration, Genesis and the rest of the band have put together this two-night festival of sorts with a wide variety of acts. This is the first night and includes swaggering punk/blues/cabaret singer-songwriter Shilpa Ray. UPDATE: Canceled due to the storm.