photo: Disappears at Bowery Ballroom in 2014 (more by PSquared) 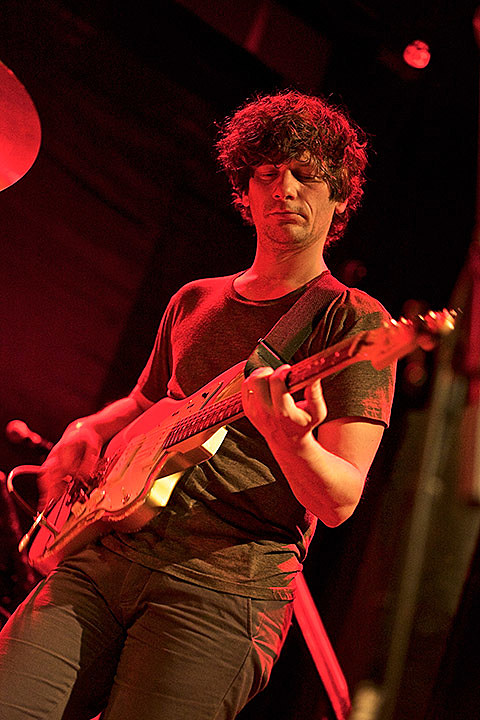 Disappears @ Baby's All Right
Disappears covered 'Low' in full live last year as part of the David Bowie exhibit at Chicago's MCA, putting their own stark, krauty bent on what was an already stark and krauty record. They decided back in November to play it a few more times in other cities and here we are tonight. That Bowie has since passed makes it a little more special, but any chance to see this powerhouse band (with one of best rhythm sections going) are worth seeing no matter what. Just as exciting: they'll be playing a set of all-new material as well. Highly recommended.

Unknown Mortal Orchestra, Lower Dens @ Irving Plaza
UMO got decidedly more funky on their last year's album, Multi-Love, which could make tonight's show quite the party. Lower Dens are loosening up, too. This is their second of two sold-out nights at Irving.

Timmy's Organism, Video, Regression 696 @ Rough Trade
Detroit heavy garage rockers Timmy's Organism and angular Austin punks Video (members of Radioactivity and Bad Sports) both released new records last year on Third Man Records. Now both bands are on the road for the Third Man-sponsored "Audio Social Dissent Tour." With this label behind the tour, that also means there will be some limited edition, tour-only vinyl at the merch table, specifically a 12" three-way split live record of Timmy's Organism, Video and Wolf Eyes performing at Devil's Night 2015.

Chris Conley (of Saves the Day), Matt Pryor (of The Get Up Kids), Andy Jackson (Hot Rod Circuit), Dan Adriano (of Alkaline Trio), Anthony Raneri (Bayside) @ Bell House
It's the recurring 'Where's The Band' tour, which sees frontmen of punkish bands strip down for acoustic solo sets. Of particular note are a few guys who shaped the sound of emo as we know it, Chris Conley, Matt Pryor and Andy Jackson.

The Men, Cheena, Ora Iso, Kyle Keays @ Trans Pecos
This is a cool double bill with the jammy country punks The Men and local "supergroup" Cheena, which includes Pharmakon plus members of Crazy Spirit, Dawn of Humans, L.O.T.I.O.N., and Hank Wood & The Hammerheads.

Maybeshewill, Driftoff @ Bowery Ballroom
British instrumental rockers Maybeshewill have been around for a decade but never played the U.S., and they're breaking up after this sole gig here. Catch 'em while you can. It's also a good double bill, with local post-hardcore band Driftoff (featuring members of Junius, Rosetta, City of Ships).

Kacey Musgraves, The Cactus Blossoms @ Starland Ballroom
Kacey Musgraves may exist in the mainstream country world, but she's got an edge that has gained her a lot of praise in the indie realm recently. She deserves it -- last year's Pageant Material was effortlessly replay-able.

Seu Jorge @ Blue Note
Best known here in America for acting in City of God and The Life Aquatic With Steve Zissou (which he scored using only acoustic, Portuguese David Bowie covers), but Brazilian artist Seu Jorge has been making music since the '90s. This is part of his 10-night run at the Blue Note.