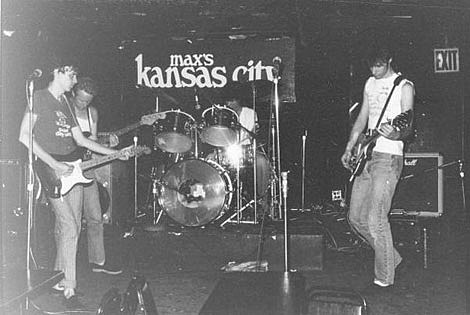 Veterans of the 80's downtown music scene, Band of Outsiders disbanded 20 years ago this month. (Their farewell CBGB gig, with Nikki Sudden sitting in, became a live album named for the date, Armistice Day.) 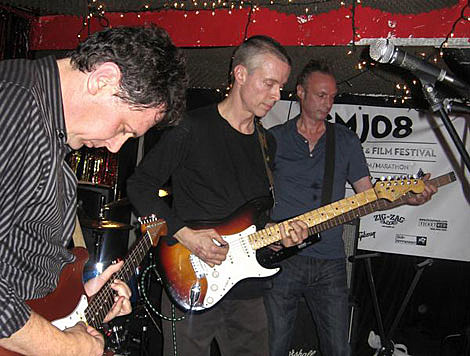 Band of Outsiders reunited to play a benefit show for Laura Kennedy (original bassist of the Bush Tetras) at Cake Shop on October 26th of this year. Tonight they play a 2nd reunion show at Lakeside Lounge (162 Avenue B). It's free. Video from Cake Shop, and more info on the band, below...

Band of Outsiders were formed in New York City's East Village in October 1980. While playing the downtown club circuit (Max's Kansas City, CBGB, A7 etc), the band recorded and released its debut single "Done Away" b/w "Tote Bag Ladies". In summer 1981 UK's ZigZag magazine editor Kris Needs gave the record a favorable review and became a champion of the band throughout their career. Back in the States, a set at the Mudd Club that caught the attention of Ivan Kral. The former Patti Smith guitarist produced studio recordings of the band during 1982-84. During this time the band played larger NYC venues (Irving Plaza, Danceteria, Peppermint Lounge, etc), and began performing regularly out of town throughout the DC-Boston corridor. In late 1983, Kris Needs came to NYC as press agent for Specimen, the house band for the London goth club, the Batcave. And as part of the group's US launch, they staged a Batcave night in NYC at Irving Plaza. Needs put Band of Outsiders, and another local band, Certain General, on the bill. Soon after, the two groups put out an album that featured both bands live and in the studio, followed by a joint tour. The album, titled Far Away in America, was released in April 1984 on the groups' own newly-constituted Sourmash Records label. Needs' liner notes evangelized the music and outlined the rest of the plan: following a string of gigs in the Northeast, the bands traveled to the UK for a series of London-area shows. Kral-produced sessions from June 1984 were released in the UK on an ep titled Up The River, and in France, along with some 1983 Kral sessions, on an LP titled Everything Takes Forever. Both releases were well received, and as a result the Outsiders would spend much of 1985 touring the UK and Europe and recording in France. April 1985, self-produced sessions in Paris yielded the ep Longer than Always. In October in NYC and November in Paris the group recorded tracks for its album Act of Faith. Throughout 1985 the group was generating rave reviews for its releases and performances in the UK and Europe. And Act of Faith, eventually released over a year after being completed, was hailed in UK fanzines like Bucketful of Brains and Sounds as a masterpiece. In mid-1987, the band self-released an expanded American version (including tracks from Longer than Always), titled Acts of Faith. Thereafter they left for what would be their final European tour, at the end of which they went separate ways. Back in the US, Acts of Faith continued to garner rave reviews in fanzines. On November 11, 1988 the group played a one-off reunion show at CBGB. It was recorded and released as Armistice Day by Nocturnal in the US and Conviction Records in the UK. The farewell set included a guest appearance by Nikki Sudden, and the album featured liner notes by the Barracudas' Jeremy Gluck.In April 1999, the group reformed for a gig celebrating the 25th anniversary of CBGBs, on a bill with Certain General and the Fleshtones. In October 2008, the group reformed again to play a special benefit show, to help raise money for a liver transplant for Bush Tetras' original bassist, Laura Kennedy.