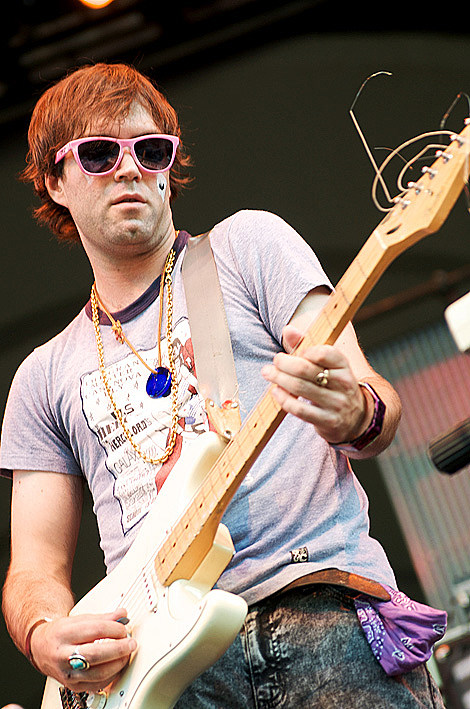 Matt & Kim play a free outdoor show tonight, the first of this summer's HudsonRiverRocks series. That'll bring Ted Leo and Yeasayer in the coming weeks. Opening tonight's show are Team Robespierre and Flosstradamus (whose remix of Matt & Kim's "Yea Yeah" is below with other, revealing M&K vidoes).

"Four cemetery workers have been charged with dismembering bodies after police found what they called "startling and revolting" conditions at a historic cemetery near Chicago." [AP]

Titus Andronicus and The So So Glos play a free-with-RSVP, limited-capacity show hosted by Colt 45 & Vice at Glasslands tonight. See a video of Titus "Shotgunnin' Burrs" with The Soft Pack on their UK tour together, below.

The Drums, who will be gigging in NYC a lot this summer, play Public Assembly tonight with Living Days, Zambri and Kordan.

Suckers begin their four-Thursday Pianos residency with guests The Octagon, Hearts of Darknesses and Etta Place.

Chairlift, Adam Green, Lightspeed Champion and others play a benefit for local musician Jon Wiley at The Shank.

In a nice triple bill, Those Darlins, Heavy Trash and Shilpa Ray & Her Happy Hookers all perform at the Mercury Lounge tonight.

The NY Ear & Eye Fest II kicks off tonight at the Knitting Factory. The fest includes a record fair/concert at the 92YTribeca on Saturday and a closing party at Death By Audio Sunday night. 92Y is sceening record store doc I Need That Record tonight with filmmaker Brendan Toller in attendance.

"Google says that its forthcoming Chrome operating system will be so secure that "users don't have to deal with viruses, malware and security updates." But Google's claim is being met with skepticism within the Internet security world." [PC World]

The first free Williamsburg Waterfront show is this Sunday.

The Pains of Being Pure at Heart plays South Street Seaport on Friday.

Title Tracks, which is John Davis formerly of Q and Not U, plays the Cameo Gallery with The Nouvellas and Charles Burst.

Filed Under: Blitzen Trapper, Matt and Kim, Q and not U, The Soft Pack, Title Tracks, Titus Andronicus
Categories: Music News, What's Going on Tonight in NYC
Comments
Leave A Comment
Back To Top