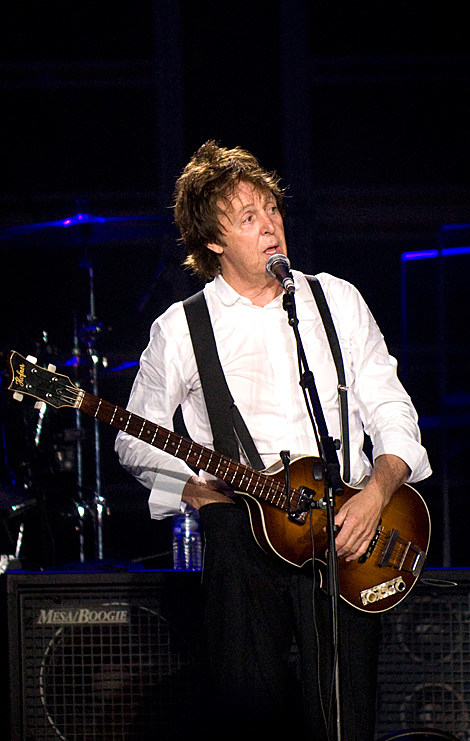 The rain puts some of tonight's outdoor music in question.

Due to the threat of inclement weather, this evening's 6:00 pm performance of SITELINES: A Space Funk Invasion by Nicholas Leichter Dance has been cancelled. Future performances will go ahead as scheduled.

Another show that is cancelled (possibly rescheduled) is Marc Ribot at Hudson Square. Celebrate Brooklyn hosts a benefit (aka not free) show with Jackson Browne
at the Prospect Park Bandshell (still happening). Karsh Kale & Timeline, Gamelatron and Forward Motion Theater will be inside at the World Financial Center's Winter Garden (as originally planned).

The cast of The Mighty Boosh will be at Other Music at 6pm and Bowery Ballroom tonight. Both are free, but Bowery probably requires you to your MySpace profile printed out with MySpace Secret Standup as your friend.

Paul McCartney plays his third of three Citi Field shows tonight, and there's a chance he'll make an appearance at MSG in October.

Tortoise returns to NYC after its Pitchfork Fest appearance for a show at (Le) Poisson Rouge.

Sexmob and Fight the Big Bull play an early show at Joe's Pub. The latter comes back for the late gig with Lee Fields and The Phenomenal Handclap Band.

The ESP-Disk label brings jazz acts Mary Halvorson & Jessica Pavone and Talibam to the Bowery Poetry Club. At the Blue Note, the Bad Plus' Ethan Iverson plays with Charlie Haden (who's there all week). Catch Ethan with his band at the Highline Piano series in August.

Casper & The Cookies play the first of two NYC show on their tour with Everything, Now tonight at the Cake Shop.

A video of Frightened Rabbit, who just played Siren Fest and with the now-retired Oxford Collapse, playing at the warehouse of Fat Cat Records, is below.