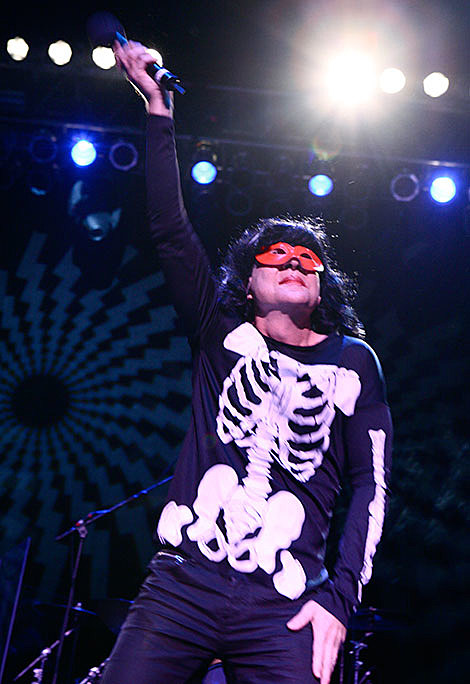 De La Soul was supposed to play at Ortley Surf Club in NJ tonight, but apparently it's been cancelled.

The Ben Sherman Store in Soho (95 Spring St) hosts the release party for New Tales To Tell: A Tribute To Love And Rockets, out today, with music from Frankenstein 3000, Earl Slick, Dennis Dunaway and David Johansen. The party starts at 8.00pm. Video of VEX covering Love and Rockets' "It Could Be Sunshine", below...

The B-52s play the Beach at Governors Island. First person to email BVCONTESTS@HOTMAIL.COM (subject: B52s) gets a free pair of tickets. Include your first and last name.

The Breeders kick off two nights at the Bowery Ballroom. Whispertown 2000 opens.

Lemonade and Cale Parks launch their tour together at Santos with Dinowalrus and Teengirl Fantasy.

Mugison is playing a free show in every NYC borough today. SI and Queens were earlier today, but you can still catch him at Bronx River Art Center (5pm), City Winery (8pm) and Pete's Candy Store (11pm). Why?

...to create awareness and support for the pioneering worldwide human rights advocacy group. In association with local art and music collectives, Mugison will play one free concert in each of New York's five boroughs in one day, August 18th. A limited edition event poster will be offered at the shows and proceeds will benefit Amnesty International.

The Stone's August curator, drummer Tyshawn Sorey, returns to the venue tonight after a stint in Europe. He joins saxist Steve Ruel (who also plays with the Stone's early set) in a quartet.

Ricky Gervais reps the NY Comedy Festival, which presents him at Carnegie Hall in November, in a video below.

VEX "It Could Be Sunshine" Love and Rockets tribute from Hunter Senftner on Vimeo.