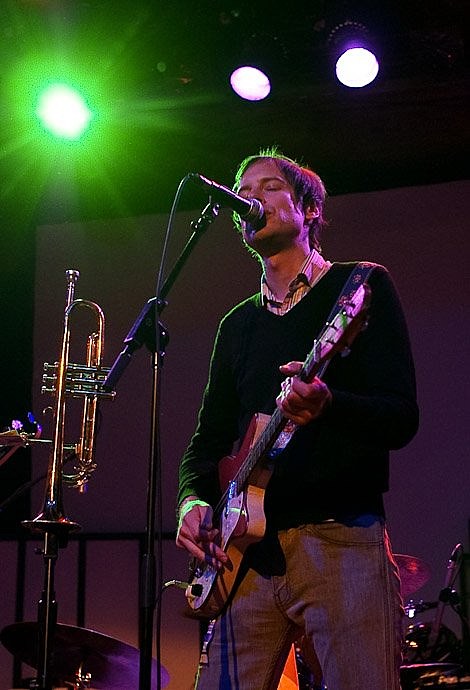 Geronimo, who in the midst of a short tour, join up with Pollution and Hex Machine at Death By Audio tonight.

Spindrift are in back on stage tonight at Cake Shop, playing a second show in NYC after supporting Hopewell last night at Union Pool. The band professes to be influenced by Carnival Music, Vampire Soundtracks, Norwegian Classical Folk Music, Swamp Blues (Lonesome Sundown), Outer Space, Henzig and ICE-T O.G. among other things, but I hear the gunslinger moments of Ennio Morricone on acid tabs. Electric Tickle Machine and Werewolves support. - Black Bubblegum

West Palm Beach, Florida's post punk beachcombers Surfer Blood play the last of their four NYC shows tonight at, appropriately enough, The Surf Bar Bruar Falls (it moved) in Williamsburg. I spaced and forgot to put them in TWII this week -- worth checking out. - Bill Pearis

Ex-Guided by Voices guitarist Doug Gillard plays an electric set at Maxwell's with Get Help and Eastern Anchors, plus comedy from Doug's sometimes-bandmate Dave Hill.

These United States just opened for Deer Tick and Dawes at the Bowery Ballroom. Tonight they headline a show at the Mercury Lounge with Motel Motel, Company of Thieves and Nick Howard.

Insound's 10 year anniversary show comes to the Brooklyn Bowl, with a great lineup that includes Cymbals Eat Guitars, These Are Powers, The Drums and Real Estate. Real Estate, who go on first, at like 7:30 tonight, also played earlier this week at Vivian Girls' tour kick off at DBA. Two videos from their set are below...

New Peaches video for "Take You On" below...