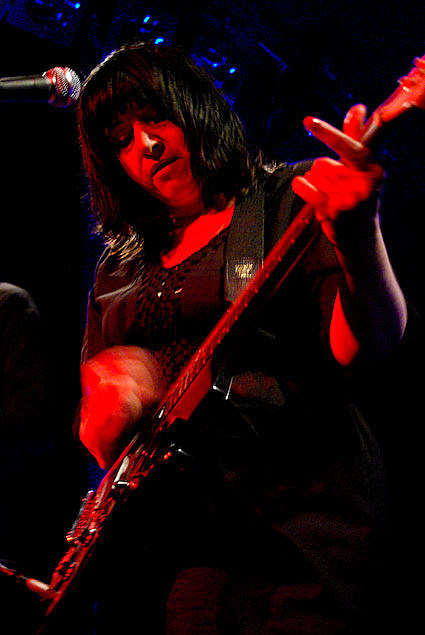 The Antlers are currently on tour with Holly Miranda. They play Maxwell's tonight with Family Of The Year. You can also see the Antlers on October 20th at Music Hall of Williamsburg.

Teenage Jesus & The Jerks, Sightings, Drunkdriver and Talk Normal play the WFMU Fest at Music Hall of Williamsburg. Last night Pissed Jeans was the headliner of the same festival at the same venue. The night before that was Faust.

Chain and the Gang was supposed to play Market Hotel - the show's now at 171 Lombardy Street...

...a wonderful, big (but cozy) new space in a dramatic location w/ a beautiful roof patio overlooking the Midtown skyline, the Greenpoint industrial district & the Kosciusko Bridge -PLUS- it's air conditioned & heated & has a killer soundsystem & great dance floor lights & no neighbors. Djs outside on the patio if it's warm / dry enough! - Todd P

Fiasco and Preacher and the Knife are also on the bill.

Bruce Springsteen and The E Street Band do Born In The USA at Giants Stadium tonight.

Micachu & The Shapes join ACME at (Le) Poisson Rouge. Last night they were at Littlefield. The night before that we hosted them at Pop Montreal which is still going on up in Canada all this weekend.

Speaking of going on this weekend, ACL is happening in Austin.

The Pains of Being Pure at Heart, Cymbals Eat Guitars and The Depreciation Guild perform at Webster Hall. The same local lineup probably wouldn't have sold out Mercury Lounge a year ago.

Canada's Besnard Lakes skip Pop Montreal for NYC this weekend. Tonight they're at Mercury Lounge with Acrylics and The Cinnamon Band.

Lucinda Williams plays two sets, one of which is material only from her 1979-1989 catalogue, at Irving Plaza. Her next two shows cover the following two decades.

The Dø follow up their Pop Montreal show with a gig at Hiro Ballroom at the Maritime Hotel.

A video from the recent Coathangers show at Cake Shop, below...

Arctic Monkeys played Last Call Thursday. That and other videos below.....

The Coathangers - Shut The Fuck Up live @ Cake Shop

Zombieland's Woody Harrelson Talks About Being a Vegan