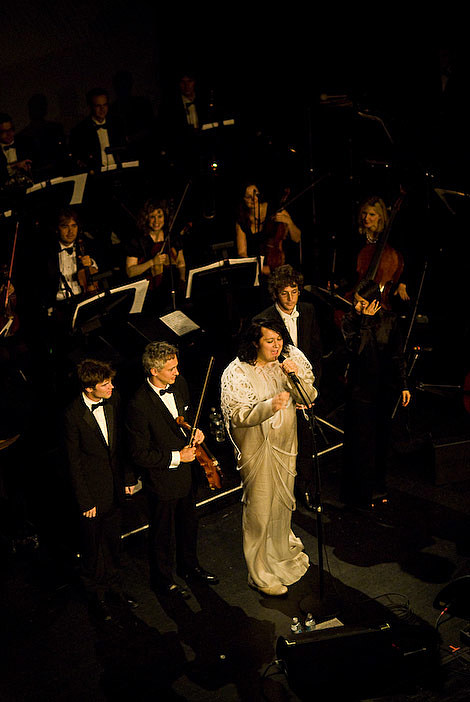 Sufjan Stevens kicks off a four-night run with Cryptacize at Bowery Ballroom.

"Count yourselves among the fortunate, Philadelphians. Celebrated songwriter Sufjan Stevens is playing only 14 shows on his tour that launched at a sold-out Johnny Brenda's on Monday, and with a repeat performance scheduled last night, two of the indie auteur's dates were set at the cozy Fishtown club.

Stevens' 75-minute set with his six-piece band was notable for more than just its intimate setting. (Last time through town, Stevens - who brought the indie-music world to ecstasy with his 2005 folk-baroque album Illinois - sold out the Tower Theater in Upper Darby, roughly 10 times the size of Johnny Brenda's.)

Coming on stage in a Zoo York skull-and-bones T-shirt and camouflage cap, Stevens was backed by an able and adaptable ensemble that included a trombonist who played guitar and a trumpeter who switched off to French horn and keyboards. Finger-picking a banjo, and singing in a tremulous voice, Stevens began by conveying a sense of spiritual wonder with "All the Trees in the Field Will Clap Their Hands" from 2004's biblical-flavored Seven Swans." [philadelphia inquirer]

Sufjan performed all of Seven Swans at ATP NY this year.

Rian Johnson's Mountain Goats concert film, Life of the World to Come, screens at Housing Works Bookstore with the director and John Darnielle in attendance.

Zazen Boys were scheduled to play Southpaw tonight, but their trip here was canceled.

Have you checked out the new Knitting Factory Brooklyn yet? Tonight the venue presents Princeton, Maps and Atlases, and Laura Stevenson & The Cans. In October Princeton is going on tour with Art Brut.

Video of Lady Gaga on SNL, new Breakfast at Sulimay's, Volcano Choir and more below...