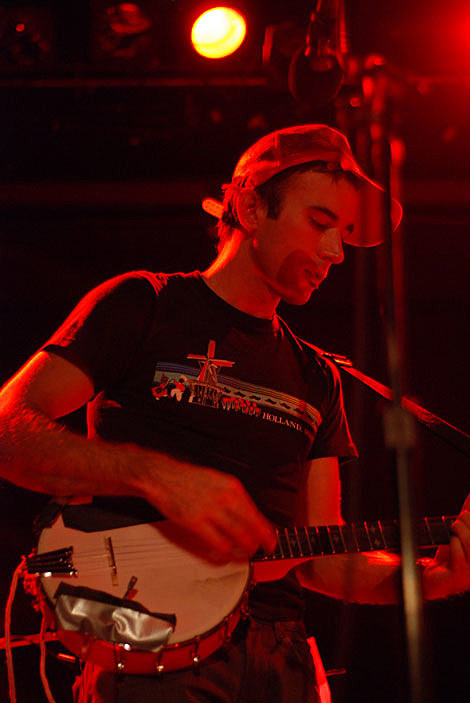 "From the ashes of punk stalwarts The Clone Defects-- who broke up in October '04-- rises a new and incredible band fronted by Defects' Tim Vulgar. Human Eye has rotated more heads than an exorcism televised during half-time at the Super Bowl. Vulgar calls what Human Eye does alien punk, though it is primitive enough to recall the basic punk attack of The Dead Boys or any Killed By Death band you care to name colliding with Throbbing Gristle or Chrome. You know, earthy but art-damaged. The quartet recorded the twelve tunes for their debut with Ryan Sabatis of the Piranhas in his basement studio over the course of several months (though it could have been done quicker had the drummer not been jailed for burgling audio-visual equipment from a school). Only in Detroit does one find musicians of this caliber. Figures it was the drummer." [In the Red]

Sufjan Stevens and Cryptacize repeat last night's Bowery Ballroom show with another at the same venue. Tomorrow and the next night they play at Music Hall of Williamsburg.

Lucinda Williams does the last of her NYC career retrospective shows at Irving Plaza.

Rufus Wainwright performs at A Place at the Table at Chelsea Art Museum. It's a benefit for the Ali Forney Center, which is a shelter for a homeless LGBT youth. Rufus appeared with Scarlett Johansson and Gavin Friday at last night's Carnegie Hall benefit for (RED).

A new video from Los Campesinos! for their song "There Are Listed Buildings" is posted below. They last visited NYC in August.

New Dead Weather video for "I Cut Like A Buffalo" is below.