Monotonix @ Sasquatch Fest in May (more by Chris Graham) 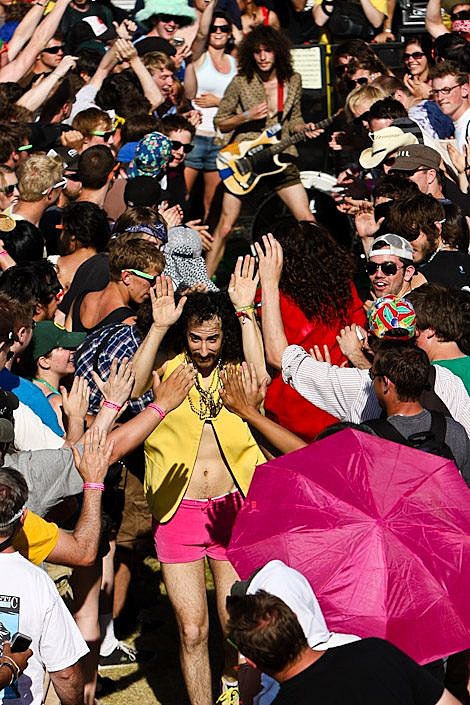 Born in the U.S.A. is the seventh studio album by American rock singer-songwriter Bruce Springsteen, released on June 4, 1984. His popular and commercial triumph, it found Springsteen marking a departure in his sound - while the predecessor, the dark and acoustic Nebraska featured songs of pessimism and isolation, Born in the U.S.A.'s lyrics expressed signs of hope in the daily fight of the standard American in following the American Dream, a new feeling complemented by synthesized arrangements and a pop-flavored, radio-oriented sound that helped Springsteen to extend his already-growing popularity and dominate the mainstream audiences. In support of the album, there was an enormous commercial and sociocultural exposure throughout a large string of hit singles, remixes and music videos, and also the renewed image that Springsteen delivered - a muscular physique and a tougher, American-hero-like persona. [Wiki]

The Boss plays the last of his Giants Stadium shows, doing Born In The USA in its entirety tonight.

Reunited UK rock bands Psychedelic Furs and Happy Mondays bring opener Islands to Roseland Ballroom. Islands are back as part of their own tour with Jemina Pearl on November 5th.

Grizzly Bear and Beach House are up at Vassar tonight.

Monotonix are back in NYC for the first time since the release of their hard-to-beleive-it's-their debut LP in September. Turbo Fruits and The Beets open at Santos Party House. Tomorrow they play Market Hotel, again with Turbo Fruits. Listen to an interview with Monotonix below.

Later in the evening The Beets play Death By Audio with Thee Oh Sees and The Fresh & Onlys who play with Golden Triangle at The Bell House earlier in the night.

Grand Archives and The Most Serene Republic are on tour - they play Southpaw tonight.

Charlie Looker and Extra Life are at Drom with Kayo Dot.

Rosanne Cash plays only the hits (other people's) at her two-night St. Ann's Warehouse engagement.

The One Step Beyond party at American Museum of Natural History hosts Amanda Blank and Devlin & Darko.

Issue Project Room hosts a benefit tonight with These Are Powers and Lone Wolf and Cub.

Modest Mouse's new video for "Whale Song" is posted below.

Kurt Vile's video for "Freak Train" is below.