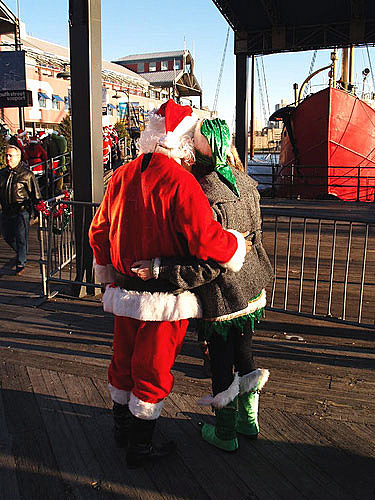 Hundreds of sloshed Santas piled into bars across the city Saturday - part of an annual pub crawl called Santacon.

I strapped on a shiny Santa Claus suit and joined a legion of merrymakers at a secret meeting spot in Queens. The booze began flowing well before the official 10 a.m. start.

A few naughty boys even dared to play three Santas in a pickup basketball game in an Astoria Park - and lost.

"Nobody tops Santa at basketball," said Pat Costello, 27, who trekked in his costume from Floral Park. [Daily News]

If you missed the Hanukkah Gone Metal show at Knitting Factory, you have anothter chance December 17th at Fontana's.

"It's been nearly a week since MySpace Music closed its acquisition of some of the assets of music service Imeem and redirected imeem.com to music.myspace.com. MySpace took a lot of heat for the sudden shutdown of the Imeem service, particularly the API." [Washington Post]

Amazon continues to release a free Christmas song a day.

iTunes is giving away a free holiday sampler (Weezer included).

Nacional Records is giving away 21 MP3s by its 'Latin Music' artists (including Manu Chao).

Keren Ann plays her 2nd of two shows in a row tonight. A live video below...

"Strong sales of the video game The Beatles: Rock Band haven't translated into job security at Harmonix Music Systems Inc., the Cambridge software company that created the game. On Thursday, Harmonix let go 39 of its employees, or about 13 percent of its workforce." [Boston Globe]