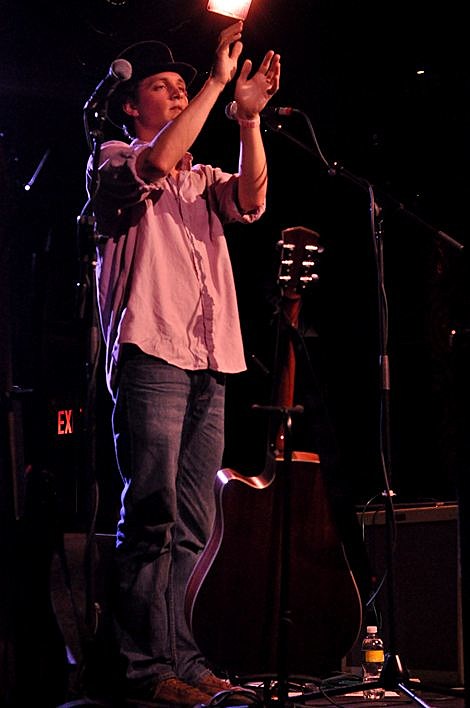 The show at Pianos tonight is a release party for Roadside Graves' new You Won't Be Happy with Me EP. Their Aquarium Drunkard labelmate Blair is also on the bill.

Blair started her career in New Orleans, moved to L.A. and now lives in Brooklyn. Aquariam Drunkard says this about her debut, Die Young:

Musically Blair echoes the early days of Liz Phair in the minimalist structure of some of her songs. It's an interesting comparison to make, but it makes sense also as she came of age in Phair's peak as a musician. Within this structure though are moments as scattered and diverse as the Southern shuffle of "Wake Up Shake Up," the girl group shimmy of "Paris France" and the closely cropped haze of "Rampage." The title track even follows the loping, punctuated delivery of Suicaine Gratifaction-era Paul Westerberg. Die Young never abandons its tone and the album keeps a cohesive feel. It always seems to be going somewhere, even if the destination is as uncertain as the lyrics' narrator.

Baby Dee's show at Santos tonight comes after the release of the newly produced A Book of Songs for Anne Marie, which came out March 23rd on Drag City. Little Annie & Paul Wallfisch are also on the bill.

Asobi Seksu perform at Japan Society (333 E 47th St) as part of a 12-hour Open House titled j-CATION. Their show, with opener Me & Mars, starts at 9:30. Tickets will be released first-come, first-served starting at 8pm, and admission to the show is included in the $5 suggested donation for the fest.

Washed Out and Small Black end their tour together with one more NYC show, this time at MHOW. They started the tour with two shows at Mercury Lounge.

White Mystery are featured this week in This Week in Indie (as are The Wedding Present who play Maxwell's tonight).

Sam Amidon and Doveman join forces once again at 92YTribeca tonight. It's a record release party for Sam who we recently interviewed. Video from the Big Ears Fest below.

BrooklynVegen Presents, as BBG said, "a killer four band bill of Weedeater, The Gates of Slumber, Black Tusk, and Struck By Lightning who will lay waste to The Studio at Webster Hall."

Thou play ABC No Rio earlier in the day. Check out the interview we just posted with the band.

Drive-By Truckers recently stopped by Sirius-XM to record a perormance. Video from that below...

We recently uploaded a video of Olof Arnalds performing at SXSW. Check that out below...