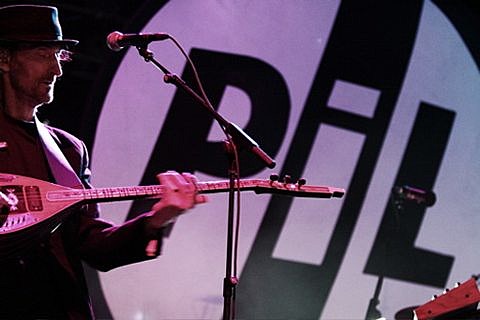 "Bees are Flowers" are really These Are Powers tonight at Cake Shop.

"Bassist Sasha Frere-Jones and drummer Clem Waldmann began playing together in 1990. Wilbo Wright joined in 1993 and Ui began recording. Ui's songs draw on rock, funk, dub and electronic music. The band's early releases incorporated instruments less common to pop - banjos, tubas and kettle drums - but the band soon stopped using any instrument that couldn't fit into a cab. In addition to one of the earliest known single-artist remix albums ("Unlike," 1995), the band has released four studio albums, including "Answers" and the nineties classic, "Lifelike." Ui has collaborated with Stereolab, Techno Animal, Microstoria and Luke Vibert. In early 2010, Dan Friel began playing electronics and baritone guitar with the band." Yes, The New Yorker's Sasha Frere-Jones is playing a show at the Bell House tonight. Parts & Labor member Dan Friel is both in the band and opening with one of his solo sets. It's Ui's first official show in 10 years, and a warm up for the slot they landed on the lineup of the Primavera Festival at the end of this month in Barcelona.

The new video for Keepaway's "I Think About You All The Time" is posted below. They play an EP release show tonight with DOM, The Tony Castles and Rewards at Mercury Lounge.

PiL's recent DC show is streaming on NPR. John Lydon is on East Village Radio at 10am. Pil play Terminal 5 tonight, and then the smaller Music Hall of Williamsburg on Wednesday.

Keepaway - "I Think About You All The Time"