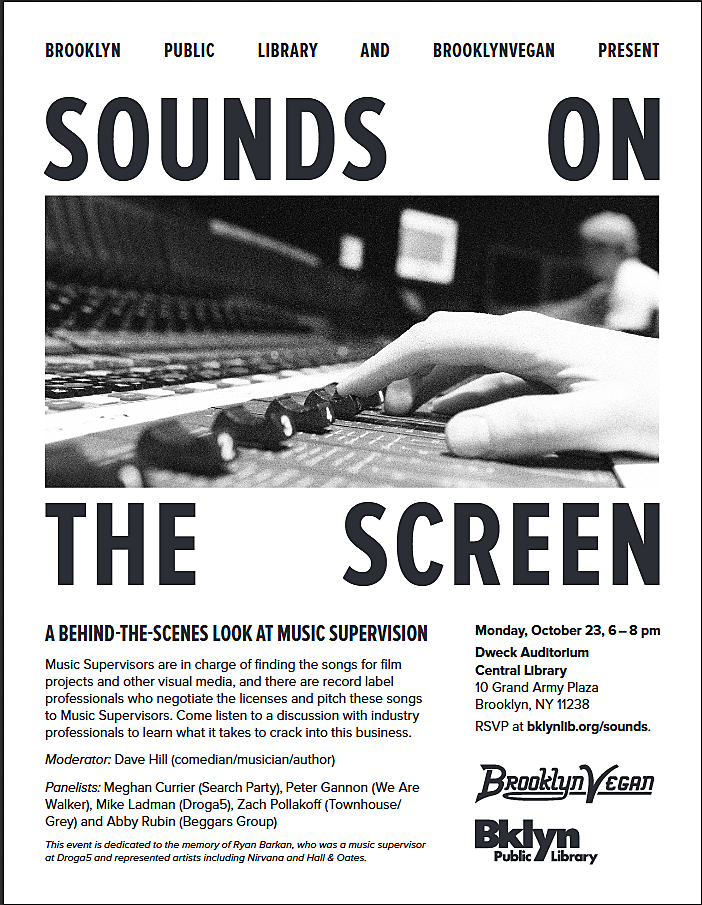 Sounds on the Screen: A Behind the Scenes Look at Music Supervision @ Brooklyn Public Library
Ever want to know more about how music gets picked for movies, TV shows, video games and commercials? BrooklynVegan is presenting this panel-discussion on Music Supervision, hosted by Dave Hill and featuring Meghan Currier (Search Party), Peter Gannon (We Are Walker), Mike Ladman (Droga5), Zach Pollakoff (Townhouse/Grey) and Abby Rubin (Beggars Group). The panel goes from 6 – 8 PM and is free and open to the public. We hope to see you there, but if you can’t make it in person it will stream live via the BPL’s Facebook and YouTube Channel.

Lana Del Rey @ Terminal 5
Lana Del Rey recently released her great fourth album Lust for Life, and this week she plays her first club shows in NYC since 2012. (She played Governors Ball in 2015.) This is the first of two nights at Terminal 5, and both are sold out. Next year, her tour hits the NYC-area for a way bigger show at Prudential Center.

Avey Tare, Geologist, Jeremy Hyman @ Bowery Ballroom
Animal Collective's Avey Tare released his latest solo album this year, and though he had to cancel a bunch of tour dates, thankfully the NYC show is still on. Support comes from his AnCo bandmate Geologist and touring AnCo member Jeremy Hyman.

Insane Clown Posse, R.A. The Rugged Man, Lyte, Surfbort @ The Well
Insane Clown Posse have been having a more public year than usual, thanks to the March of the Juggalos. They're also celebrating the 20th anniversary of their album The Great Milenko (which was infamously pulled by Disney just days after being released) by performing it on this tour. Tonight's openers include underground rap lifer R.A. the Rugged Man and local indie rock newcomers Surfbort. This show was just moved from Brooklyn Bazaar to The Well (and was originally supposed to happen at Villain).

Ryan McNamara & John Zorn @ Guggenheim Museum
"Collaborating with a community of dancers and artists with whom he has worked for years, Ryan McNamara will create a performance set to Commedia dell’arte by composer John Zorn."

Black Kids, Teen Commandments @ Baby's All Right
Blog stars for a hot minute ten years ago, Black Kids were poster children for "too much too soon." Having backed off the burner for a while, the band returned this year with Rookie, their first album since 2008.