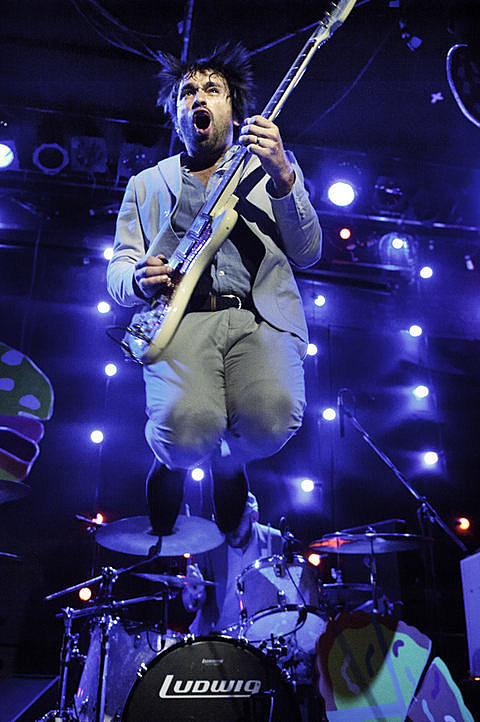 PB&J @ Brooklyn Bowl, 2011 (more by Dana [distortion] Yavin)[/caption]You can browse our full NYC show calendar for all of tonight's shows, but here are some highlights...

The Darkness, RavenEye, Best Behavior @ Irving Plaza
While none of their subsequent albums have topped their fantastic 2003 debut Permission to Land, The Darkness remain one of the most genuinely fun live bands around, with no cheesy rock move left undone.

Corporal, Jonny Gallagher, Frogbelly and Symphony, Kelly Paige @ Pianos
Sure you know Micahel Shannon as that creepy, intense guy from movies like Revolutionary Road and shows like Boardwalk Empire, but he also plays ’90s-style indie rock band in the band Corporal. They're pretty good!

Young Thug @ Playstation Theater
Young Thug is one of the most prolific rappers around right now, with two great mixtapes out already this year -- I'm Up and Slime Season 3 -- and a proper debut album promised for the near future. He sometimes breaks so many different voices on one song alone to the point where he sounds like his own guest rapper. Tonight's show is sold out.

Youth Code, Yvette, Statiqbloom, Hogwasche @ Saint Vitus
Youth Code pull from both hardcore and EBM, and this year's Commitment to Complications is another winner from the duo. Good openers tonight too.

Super Unison, Free Children of Earth, White Pisces @ The Acheron
Hardcore band Super Unison, the current band of Punch vocalist Meghan O'Neil, released their ripping debut EP last year and now they signed to Deathwish for their upcoming album. Tonight's their first NYC show, and it's a good lineup all around with Free Children of Earth (ex-Trial By Fire) and White Pisces (ex-Street Smart Cyclist).

A Conversation with Spike Lee @ SVA Theatre
Part of the Red Bull Music Academy, director Spike Lee talks with journalist Nelson George about the most famous musical moments in his films.