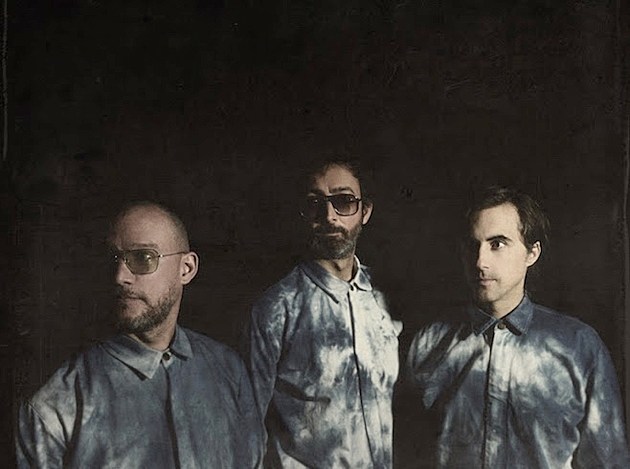 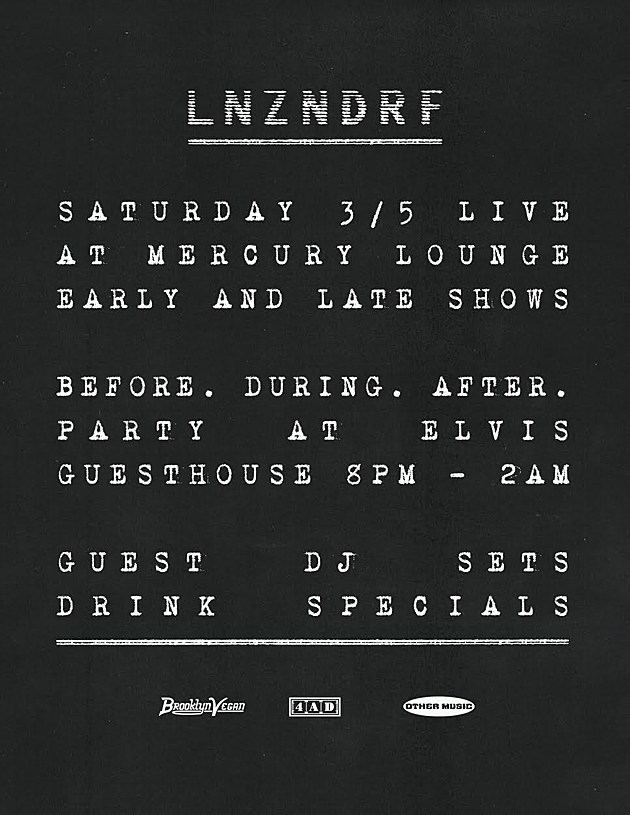 LNZNDRF @ Mercury Lounge (early and late shows)
The Devendorf brothers from The National are taking some time away from their main band to make experimental music with Ben Lanz (who's also collaborated with The National), and they've given it the clever name of LNZNDRF. Their debut album is out now on 4AD, and they celebrate with these two sold-out shows tonight.

LNZNDRF before/during/after party @ Elvis Guesthouse
Before, during and after the LNZNDRF shows at Mercury Lounge, BrooklynVegan is co-presenting a party at nearby bar Elvis Guesthouse. There will be guest DJs (including BV editor Andrew Sacher) and drink specials all night. It goes from 8 PM to 2 AM. Hope to see you there!

Somos, Petal, The Superweaks, Adult Mom @ The Studio at Webster Hall
Somos started out as an indie-punk band, but they've really raised the bar with their recently-released sophomore album, First Day Back, which is a lot more atmospheric and ambitious. The rest of this bill is cool too, with the Tigers Jaw-related Petal, who put out quite the debut album last year, punky rockers The Superweaks and bedroom singer/songwriter Adult Mom.

Ski Lodge, Salt Cathedral, How Sad @ Baby's All Right
Ski Lodge got their start making ’80s-inspired jangly guitar pop but with their new EP, main man Andrew Marr repositioned the band as sparkling, keyboard-oriented pop. Still in the same decade, just switching to a different side of the Pretty in Pink soundtrack. Tonight they celebrate the release of that new EP.

The Men, Beech Creeps, The Yin Yangs, Rathaus @ Union Pool
Brooklyn's ever-changing The Men, who went from punk to jammier territory, and haven't released any new music in some time. Where, sonically, are they now? Find out tonight.

Taake, Young and in the Way, Vattnet Viskar, Trenchgrin @ Saint Vitus (two shows)
This is a good bill all around with Norwegian black metal band Taake, crusty hardcore band Young and In the Way and USBMers Vattnet Viskar. There's a matinee show, and also a night show that has local support from Trenchgrinder.

Big Ups, LVL UP, Greys, Washer @ Shea Stadium
Big Ups just released their new album, Before A Million Universes, which is another dose of the Fugazi/Slint concoction that they nailed on their debut. This is the release show, and making the night even more exciting is that Greys are in town from Canada for it. They just announced their new album, Outer Heaven.

Shellshag, Giant Peach, Natural Sway, Pale Angels @ Suburbia
Shellshag have been regulars of the local DIY scene for a long time, and their shows are always a treat. This is part of their tour with the NJ/Wales-based punks Shellshag. It's also part of a tour for recent Don Giovanni signees Giant Peach and ex-Delay band Natural Sway.

The Range, Eddi Front, Obey City (DJ set) @ Berlin
Electronic musician The Range is a few weeks away from releasing Potential, his first album for Domino. While we wait for that, he plays this NYC show tonight.

Pional, Red Axes, JDH & Dave P @ Good Room
Pional is best known for working with John Talabot, but he does plenty on his own too. Tonight he returns to NYC for a show with FIXED regulars JDH and Dave P.

Mike Birbiglia @ The Lynn Redgrave Theater
Comedian Mike Birbiglia has been doing his show “Thank God for the Jokes” for nearly two years. He’s putting it to bed, but not before this run which just got extended through May.

An Evening with Molly Ringwald @ Birdland
John Hughes’ Pretty in Pink just celebrated its 30th anniversary and tonight its star Molly Ringwald sings cabaret. In addition to standards, Ringwald has been known to cover “(Don’t You) Forget About Me” from The Breakfast Club. 8:30 PM and 11 PM shows.

Star Trek: The Ultimate Voyage @ The Theater at MSG
Sci-fi juggernaut Star Trek turns 50 this year and amongst the celebrations is the “Ultimate Voyage Tour” where Trekkies Trekkers can "experience the franchise’s groundbreaking and wildly popular musical achievements while the most iconic Star Trek film and TV footage is simultaneously beamed in high definition to a 40-foot wide screen."