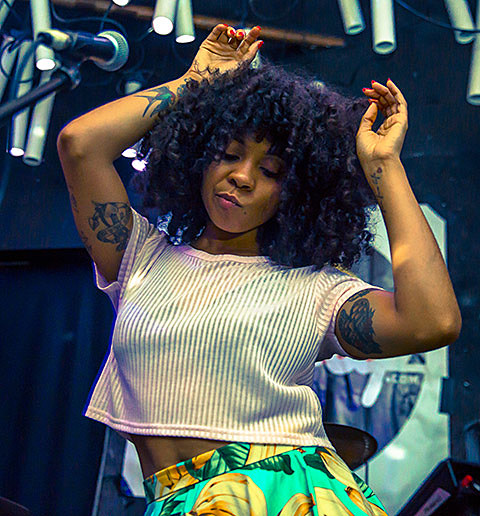 Rustie, Nadus, Remy Banks @ Music Hall of Williamsburg
While Rustie can get as maximal as a lot of the festival EDM that you might rather steer clear of, his music is too expertly melodic to be grouped with that scene. It's as great to dance to as it is to listen in headphones.

Painted Zeros, Surf Rock is Dead, Chalk and Numbers, Such Hounds, Bohemians @ Pianos
A pretty solid lineup of local bands, including the spirited indie rock of Painted Zeroes and and the retro chic of Chalk & Numbers.

Gates, Young Statues, The City on Film @ Saint Vitus
While the atmospheric Gates are the headliners and Philly indie rockers Young Statues are good too, we especially recommend showing up early to catch The City on Film, the solo project of Braid co-frontman Bob Nanna that morphed into a full band. They recently put out their first album since 2005, and if you liked that Braid comeback record, you'll find this one to be pretty essential too. Stick around after for Washed Up Emo's afterparty with guest Dj sets by Kevin of Gates and Bob Nanna.

The Veda Rays, Bodega Bay, Journalism, Secret Crush, exils @ The Shop
New Bushwick venue The Shop (which is also an active motorcycle garage and a BBQ restaurant) had their soft opening before the holidays, and they'll continue to use it a show space tonight.

!!! (chk chk chk), Van Rivers @ Union Pool
Punk-funk stalwarts !!! (Chk Chk Chk) are getting ready to head into the studio to record their new album. To make sure they're well prepared, they'll be playing their new material this week at four consecutive nights at Union Pool. (They'll play a few old favorites, too.) Tonight's the second.

Hellbent Hooker, Meth Valley, Mammal @ Acheron
Local metal band Hellbent Hooker include members of Ramming Speed and Mutilation Rites, and their live show is the kind of spectacle that you just have to see for yourself.

Robert Glasper Trio, José James, Derrick Hodge, and Kendrick Scott @ Le Poisson Rouge
NYC Winter Jazzfest continues tonight with an excellent lineup including two crossover artists: Robert Glasper, who's hip hop/jazz blend is a thing of its own, and Jose James, whose neo-soul is accessible enough for easy listening fans but edgy too.