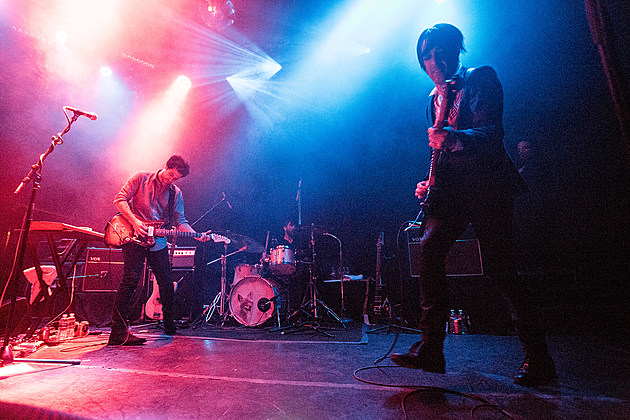 Wolf Parade at Bowery Ballroom in May (more by Amanda Hatfield)

Northside Festival
Today is the first day of the music portion of Northside Festival. Nearly every show tonight in Williamsburg, Greenpoint and Bushwick is part of it. Badges, if you have one, get you in but admission is based on capacity, so go early if it's something you really want to see. Most shows you can also get tickets at the door.

Wolf Parade, Land of Talk @ McCarren Park (Northside Fest)
Two Montreal bands who were gone for about five years but are now back and still great, Wolf Parade and Land of Talk, will join forces for this free outdoor show. The type of indie rock that Wolf Parade play -- indie rock that rocks, accessible but too quirky for the radio, overflowing with ambition -- is less in fashion now than it was when their debut album Apologies to the Queen Mary came out, and their return is a much-needed filling for that void. As proved at those recent Bowery Ballroom shows, they've still got a very devoted fanbase who are ready to make these shows as lively in the crowd as they are on stage. Land of Talk hits a very similar spot, and their recent shows have been fantastic too (thanks in part to the return of original drummer Bucky).

Richard Thompson (with string orchestra) @ (le) poisson Rouge
Folk rock as we know it probably wouldn't exist without Richard Thompson, whose albums with Fairport Convention, Linda Thompson, and solo significantly shaped how the genre sounds. His latest is 2015's Still, which Wilco's Jeff Tweedy produced. Seeing Richard is always a treat, but tonight's extra special as he'll be joined by a string section.

Steve Gunn, Yonatan Gat, Cut Worms @ Music Hall of Williamsburg (Northside Fest)
An eclectic and fun show, with a headlining set from Steve Gunn whose Matador debut, Eyes on the Lines, may be the mellow bliss-out guitar album of the summer, radiating warm vibes, impressive chops and Steve’s keen observational lyrical style. Opening this show is onetime Monotonix frontman Yonatan Gat who will likely play on the floor in the middle of the crowd, as well as Cut Worms who matches great songs (and an Everly Brothers style) with a quirky stage show, complete with canned applause.

DIIV, BADBADNOTGOOD, Sunflower Bean, The Paranoyds @ House of Vans
While local bands DIIV and Sunflower Bean are crowd-pleasers, the real appeal of this HoV show for us is Canada's BADBADNOTGOOD, who have collaborated with Frank Ocean, Ghostface and Future Islands, and whose debut album is loaded with guests. Who might show up tonight? Free, but RSVP is now closed.

Dalek, Tombs, Couch Slut, Yellow Eyes @ Saint Vitus Bar (Northside Fest)
If you like your music dark, weird and heavy, this whole showcase is for you. dälek are the great industrial rap group who were arguably a little ahead of their time when they formed in the late '90s. But now in a post-Yeezus/Death Grips/Run the Jewels world, they fit right in. This year's Asphalt for Eden (their first album since 2009) is very good. Tombs continue to break the boundaries of sludge metal, and for this year's All Empires Fall EP they added Fade Kainer of Brooklyn industrial metal band Batillus to their lineup. Couch Slut offer up a blend of metal, punk, noise rock and more, and it's all highly confrontational. And Yellow Eyes are your dose of black metal for the night.

Diarrhea Planet, Acid Dad, Sweet Crude @ Brooklyn Bowl (Northside Fest)
If you like your rock n' roll beer-fueled and deep-fried, look no further than Diarrhea Planet, who aim to please in that department.

William Bell @ MetroTech Commons
Soul icon William Bell is known both as a powerhouse performer and dextrous songwriter, having penned some of the most enduring hits of the influential Stax Records label, including "Born Under a Bad Sign" and "You Don’t Miss Your Water."

Institute, Nandas, Cheena, Haram @ Palisades (Northside Fest)
Austin's Institute share members with Wiccans and Glue, but while those bands make raw, dirty hardcore, Institute are a little closer to something like Parquet Courts (whose Andrew Savage appears on their debut LP and was also once in Wiccans). Institute's Sacred Bones labelmates Cheena (mem Pharmakon, Hank Wood & the Hammerheads, Crazy Spirit, etc) are on this bill too, and they just announced their debut album and released the killer single "Car."

The Cave Singers, Blank Range @ Mercury Lounge
Derek Fudesco recently wrapped up a tour pulling double duty as a member of both Murder City Devils and Deep Creep, and now he’s dedicating his time to yet another of his bands, The Cave Singers. They self-released their new album Banshee earlier this year (previous albums have been on Jagjaguwar and Matador).

Yumi Zouma, TEEN, Prince Innocence, Lemonade (DJ Set), CSLSX, Maria Usbeck @ Union Pool (Northside Fest)
New Zealand’s Yumi Zouma turned National Sawdust into a dance party a couple weeks back at their record release show and will hopefully do the same to Union Pool here for the Cascine/Carpark showcase. Their debut LP, Yoncalla, is full of breezy, lite pop in the best possible way, and they’re fun live. Tonight also features TEEN (whose Love Yes album is terrific), and Maria Usbeck who was last seen in Brooklyn singing from a hammock. Tickets are available (and if you don’t have a pass, this will sell out).

Will Butler (of Arcade Fire - in conversation), Wyclef Jean (in conversation) @ Samsung 837
Sponsored by The Talkhouse, this free event promises "they’ll have a lot to discuss. Wyclef is currently celebrating the twentieth anniversary of the Fugees’ album The Score, and Butler has a lot of questions." 1 PM start.

Flight of the Conchords, Arj Barker @ The Capitol Theatre
New Zealand's "fourth most popular guitar-based digi-bongo acapella-rap-funk-comedy folk duo" are back in action, and Jemaine and Brett play Capitol Theatre tonight with Arj Barker (who was on FoC's HBO series) opening.