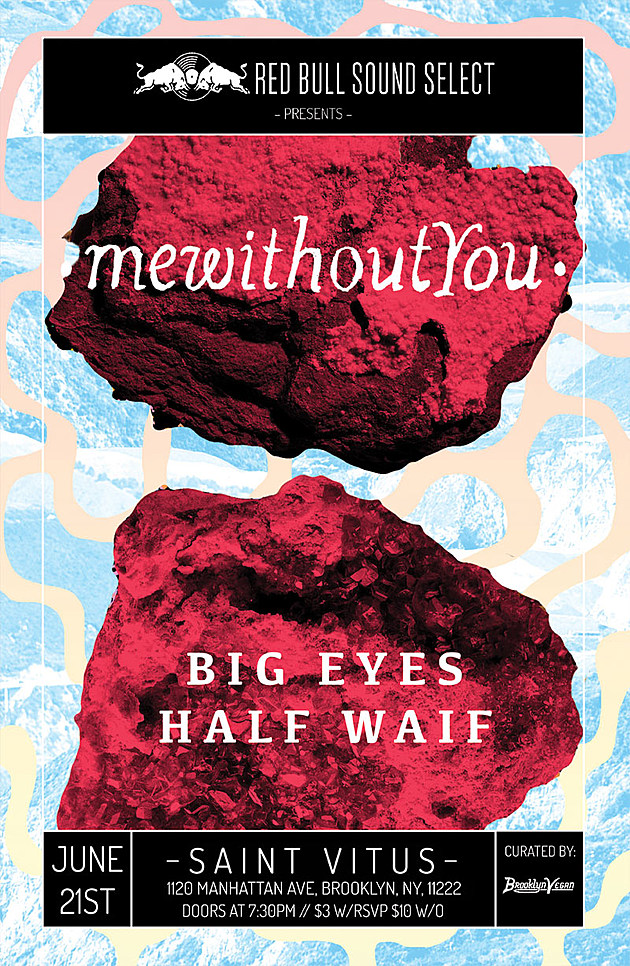 mewithoutYou, Big Eyes, Half Waif @ Saint Vitus Bar
Tonight is the next BrooklynVegan-curated installment of Red Bull Sound Select, and we're thrilled about the lineup. Headlining is the shapeshifting rock band mewithoutYou, who have been responsible for riff-heavy art rock, indie folk, post-hardcore, and plenty of the in-between. Local support comes from classic-style punks Big Eyes and art pop band Half Waif (who share members with Pinegrove). It's $3 with RSVP or $10 without, and either way, admission is first come first served, so get there on time. Hope to see you there!

Poison The Well @ Gramercy Theatre
Florida post-hardcore band Poison the Well got back together for some shows last year, and they sounded great as ever. Tonight, they'll keep the reunion going.

Ellie Goulding, Matt and Kim @ Madison Square Garden
If you dig the pop side of indie (or is it the indie side of pop?) and you like big, bombastic stage shows, this double bill is for you.

Kevin Morby, Jaye Bartell @ Mercury Lounge
Having recently released the terrific Singing Saw, Kevin Morby plays his first of two NYC dates in tonight. If you're going to this sold-out show, do catch opener Jaye Bartell whose mournful folk style is a great pairing with Morby.

Ray LaMontagne @ The Capitol Theatre
Singer/songwriter Ray LaMontagne is out on tour again, and this run is especially exciting as he'll be backed by the members of My Morning Jacket (not counting Jim James).

The Blow, Ginger Brooks Takahashi + Nica Ross @ Union Pool
Electro pop duo The Blow are currently recording a new album following up 2013’s self-titled LP. While they finish that up, they’ll premiere new material(and play old favorites too) at a three-show residency at Brooklyn’s Union Pool. This is the last day.

Wye Oak, TEEN @ Warsaw
After an album with more of a rhythmic feel to it, Wye Oak returned to more anthemic rock territory with last week's surprise-released new album, Tween. If you're going tonight, make a point to catch openers TEEN who are terrific.

Unlocking the Truth @ Museum of the Moving Image
First noticed on the streets of Times Square playing serious metal at a very young age (all in seventh grade), Unlocking the Truth became internet famous overnight and found themselves opening for the likes of Guns N’ Roses and Motorhead, and then signed a nearly $2 million dollar deal with Sony and 70-year-old manager Alan Sacks who was best known for co-creating Welcome Back Kotter. What could go wrong? Find out at this advance screening of documentary Breaking the Monster with a post-screening performance by the band too.

Aa, Charlie Looker @ Market Hotel
Great and prolific music videographer Unartig (whose videos have appeaered on BrooklynVegan many times) is sadly moving back to Germany. This show serves as a farewell party for him. Check out his video of Deafheaven's 2015 Webster Hall show, below.

Cake Shop Comedy! @ Cake Shop
If you miss Big Terrific and Hannibal Buress’ Sunday night show at Knit, and are looking for a new free, weekly comedy show that happens in a rock club and sometimes has big name talent stop by unexpectedly, “Cake Shop Comedy” might do the trick.