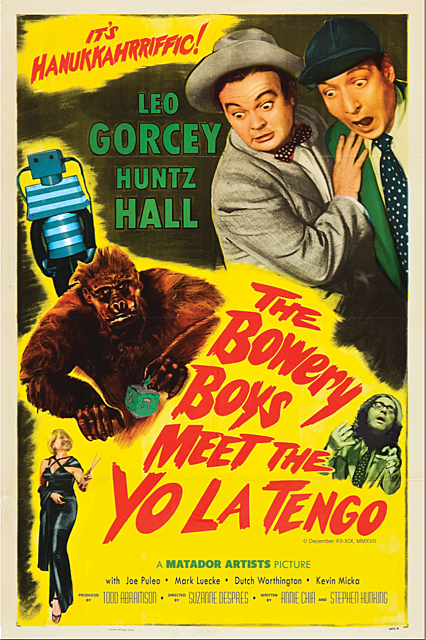 Yo La Tengo @ Bowery Ballroom
Yo La Tengo's annual Hanukkah run shows at Maxwell's in Hoboken were the stuff of legend. Four years later, Yo La Tengo are doing Hanukkah shows again, now at Bowery Ballroom. Tonight's the first night -- who do you think will open?

LCD Soundsystem @ Brooklyn Steel
It’s been quite a year for James Murphy who came back with a fourth LCD Soundsystem album, American Dream, that ended up being worth the grief of their “comeback” after breaking up in 2011. They wrap up their 2017 with a 10-night run on their home turf, this being Night 2.

Perfume Genius, Lydia Ainsworth @ Music Hall of Williamsburg
Perfume Genius’ fourth album No Shape is yet another noticeable step forward for him, and it’s deservedly been ending up on tons of year-end lists. To wrap up this great year, he’s playing four NYC shows at venues that are a little small for him these days. This is the third show.

Lil Pump, Lou the Human @ Playstation Theater
17-year-old rapper Lil Pump has only been making music since last year, but he already has a No. 3 hit with "Gucci Gang" and is big enough to headline NYC's massive Playstation Theater. His music tends to piss off the kind of people who prefer the way rap sounded before 2003, but there's clearly an audience for this kind of stuff. Whether you're already hooked or cautiously curious, you can check out his live show tonight.

John Doe @ City Vineyard
The X frontman and accomplished solo artist plays City Vineyard's intimate "Voices on the Hudson" series where there are only 100 seats.

Superorganism @ House of Yes
Superorganism are a many-membered pop collective led by teenage Maine-via-Japan singer Orono, that also features members from London, New Zealand, and Australia who all met over the internet. They’re now living together in London, they’re signed to Domino, and make their NYC debut tonight.

Neil Hamburger, Bobby Valli @ The Bell House
In very much the Andy Kaufman tradition of line-blurring between comedy, performance art, and audience-patience-testing is Neil Hamburger, aka "America's Funnyman." Neil's particular comedy stylings may not be for everyone but he's a treasure nonetheless.