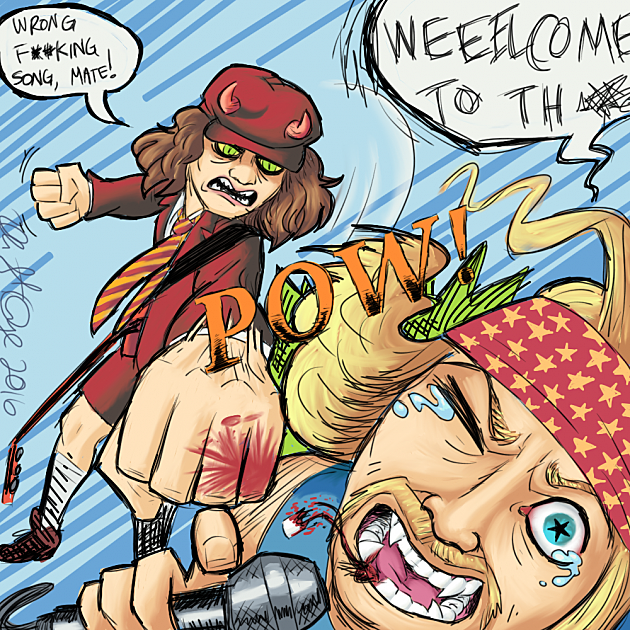 AC/DC (with Axl Rose) @ Madison Square Garden
Fans seem pretty torn on whether or not Axl Rose is a good replacement for Brian Johnson in AC/DC, but if you want to see some of the best arena hard rock songs ever, this is the place to be tonight.

Lush, Tamaryn @ Terminal 5
Having gone from shoegaze to Britpop before calling it quits, Lush are back, having released a terrific new EP that sounds like no time was lost at all. This is their second of two NYC shows.

Phil Lesh & Friends @ The Amphitheater at Coney Island Boardwalk
Grateful Dead mania pretty much never ends, but it's arguably never been as prevalent with indie rock audiences as it has been this year. As always, there are a handful of Dead-related tours going down, and Phil Lesh & Friends is a truly great one. Tonight's their first of two shows at this Coney Island venue. The lineup includes Jackie Greene, Eric Krasno, Karl Denson, The Shady Horns, Jason Crosby, and Alan Evans.

Jenny Lewis & The Watson Twins, Jessica Pratt @ The Capitol Theatre
Jenny Lewis & the Watson Twins are on the road celebrating their beloved album Rabbit Fur Coat for its tenth anniversary. A couple recent shows had Conor Oberst show up, but even if he doesn't show tonight, this will still surely be a memorable show. And don't miss folky opener Jessica Pratt.

Thalia Zedek, Tara Jane O'Neil, Devin Hoff @ Union Pool
For a night of experimental songwriters who have been at it for years with no sign of slowing down, head to Union Pool.

Nao @ Music Hall of Williamsburg
Alt-pop continues to reign, and Nao is one of the latest breakouts. Tonight's show is sold out.

inc. no world @ (le) poisson rouge
Formerly known as Teen Inc. and then simply as inc., downtempo R&B duo inc. no world released their sophomore album As Light As Light this past Friday, and tonight they celebrate it in NYC.

Babyfather @ The Panther Room
The unique, mysterious electronic musician Dean Blunt (not his real name) seems to always be working on something new, and lately he's been focusing on his Babyfather project.