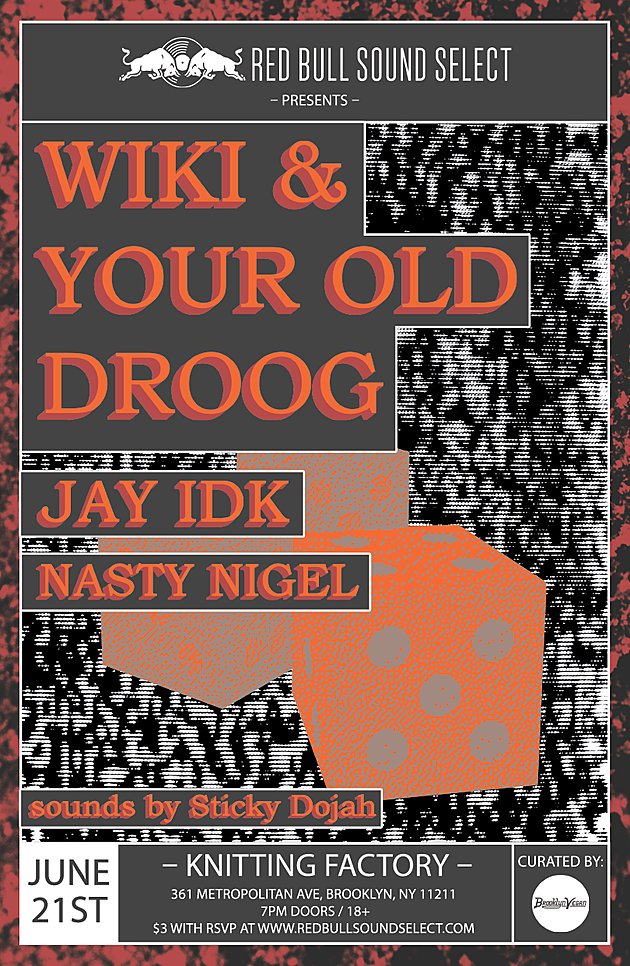 Wiki & Your Old Droog (with DJ Edan), Jay IDK, Nasty Nigel @ Knitting Factory Brooklyn
The next BrooklynVegan-curated Red Bull Sound Select show is tonight, co-headlined by New York rappers Wiki (of Ratking) and Your Old Droog. Wiki and Droog are playing individual sets in addition to a collaborative set, and psych-rap master Edan is DJing with them. Opening is Maryland rapper Jay IDK and World’s Fair/Children of the Night member Nasty Nigel, who's collaborated with Wiki. Sticky Dojah is your DJ for the evening. Doors are at 7 PM and admission is $3 with RSVP or $10 without.

Digable Planets, Natasha Diggs @ Coffey Park (Red Hook)
Digable Planets' groovy, jazzy vibe is just made for outdoor shows like this one, which is part of SummerStage 2017.

LCD Soundsystem @ Brooklyn Steel
By the end of 2017, LCD will have played almost twice as many shows at Brooklyn Steel as Billy Joel has at MSG. This is #10 of 22 for the year...expect lots of hits, four new songs, and a encore of "Dance Yourself Clean" and "All My Friends."

B Boys, Flasher, The Wants @ Sunnyvale
DC trio Flasher, who are led by Taylor Mulitz of Priests, fall somewhere between snarling post-punk and fuzzy '90s indie, and they do it very well. Their new single on Sister Polygon is terrific.

Sevdaliza @ The Studio at Webster Hall
Iranian-born, Dutch artist Sevdaliza combines a brand of minimalistic trip-hop with detailed visual artistry, which is clear in her music videos. (She’s been compared to both Bjork and FKA twigs.) Sevdaliza is putting the finishing touches on her debut album, ISON, which is coming out later this year. Tonight's show is sold out.

Huey Lewis and the News @ NYCB Theatre at Westbury
One of the '80s biggest hitmakers, Huey Lewis & The News were never exactly cool (despite their song "Hip to Be Square") but their songs have had staying power.

The Airplane Family, Live Dead 69 @ Ridgefield Playhouse (NJ)
It's the 50th anniversary of the Summer of Love, and many celebrations are in the air. This double bill hearkens back to late '60s Haight-Ashbury bills, with The Airplane Family (featuring musicians who have played in Jefferson Airplane, Jefferson Starship, and Hot Tuna) and Live Dead '69 (featuring original Grateful Dead pianist Tom Constanten).

Sasheer Zamata, Rob Haze, Mike Abrusci, Tommy McNamara, Julia Claire, Blair Socci, Martin Urbano @ Union Hall
This is Rent Party, an "improvised music and stand up show that’s about as much fun as you can fit into one place," hosted by Yedoye Travis, and Farah Brook. Union Hall is still undergoing renovations after the fire earlier this year but the downstairs showspace is up and running.