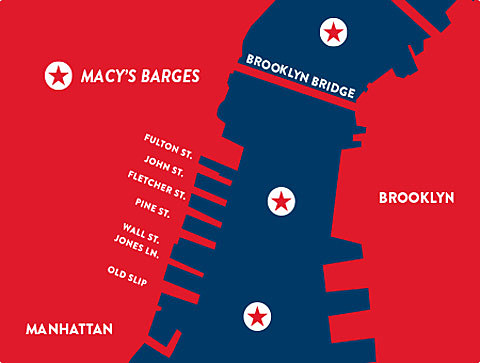 The 4th of July means fireworks, and Macy's annual extravaganza is back on the East River for the first time in five years. This year's display is in honor of the 200th anniversary of "The Star-Spangled Banner" and will use some 50,000 pounds of explosives launched from the Brooklyn Bridge and barges below on the water. They should start around 9 PM. Obviously, anywhere with an unobstructed view of the sky is a good place to watch -- like say a friend's roof -- but there are designated public viewing sections on the elevated portions of FDR Drive with the following entry points:

Montgomery & South Streets: From the north (viewing along the FDR between Manhattan Bridge and Montgomery Street).

ADA viewing area: Murray Bergtraum High School track and field facility, at the base of the Manhattan Bridge. Use the entrance at Market & Cherry Streets.

The following pedestrian streets will be closed to all non-emergency vehicle traffic:

There will also be fireworks in Coney Island on the Fourth, following the Brooklyn Cyclones game.