I haven't even finished posting who I did see (Joggers, Celebration, Walking Concert, De Novo Dahl, We are Scientists, Wolf Parade, etc...), but anyway here's who I DIDN'T see at CMJ 2005... 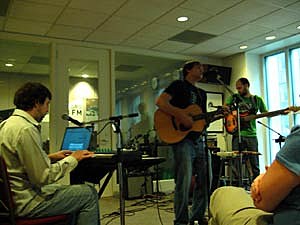 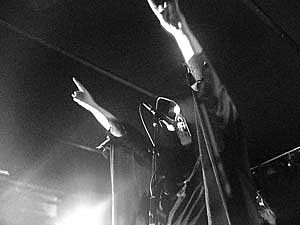 3. Goblin Cock
I really wanted to see this Heavy Metal side project of Pinback's Rob Crow, but my Thursday night was already jam packed. Kathryn was there. That's how I got the picture. UIAUD says they were a "hysterical parody of doom metal." 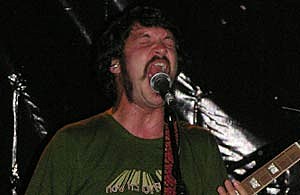 4. Cursive
I'm trying to stay away from established bands on this list, but there was a lot of talk about Cursive being the secret guest at the Saddle Creek showcase. The above cropped photo was stolen from heartonastick's photo post. It proves they made it to the show. 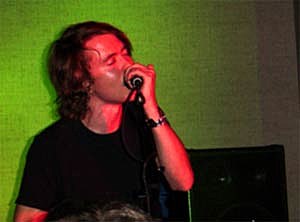 5. Tom Vek
I had multiple chances to catch Tom during his first trip to NYC, but failed all of them. Rajeev from One Louder was more focused . He's got a review with pictures (including the one you see above). 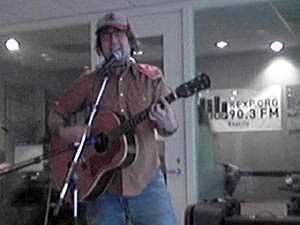 6. Devin Davis
Last but not least, I wanted to check out Devin Davis at KEXP, day stage, or CB's Gallery. I didn't make it to any, but Yeti Don't Dance was at the KEXP one. That's where I got the above photo.

7 (sort of). ANY KEXP SHOW
Though the KEXP in-studios were a major highlight of CMJ 2004 for me (imagine a small room, the Arcade Fire, and like 30 people), I didn't make it to even one this year. That's okay because eventually KEXP will post them all as individual streaming shows. In the meantime, you can download them as podcasts or search for the streams by date and time.

As previously mentioned, I missed Bell Orchestre due to a scheduling error on CMJ's part. I also didn't see Clap Your Hands @ Mercury Lounge, The Hold Steady, Regina Spektor @ Irving Plaza, !!!, or Lady Sovereign, but those don't count in this post.