photo: Whirr at Baby's All Right in April (more by Mimi Hong) 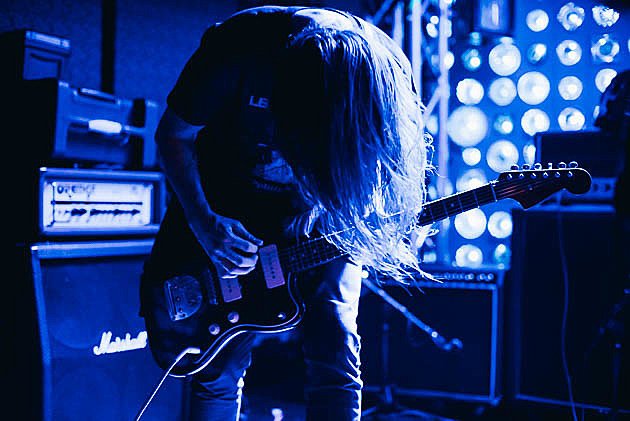 You probably know by now about the controversy surrounding Whirr posting transphobic tweets about G.L.O.S.S., and Run For Cover Records severing ties with the band as a result. The day after it all went down, Whirr's Nick Bassett posted an apology saying that the tweets were posted by a friend who sometimes runs their Twitter account, and now he's expanded on that to Billboard:

Bassett begins by saying Whirr didn't have a Twitter account until after learning of an imposter account about a year ago. After setting up a real Twitter handle to offset the fake one, the band "decided it would be funny if we had our merch guy/friend of the band run it, with the exception of me chiming in from time to time," Bassett says. This friend, he says, wrote in a style similar to the contentious tone on Whirr's Facebook and Tumblr presences, which Bassett calls "purposely immature and not to be taken seriously or to heart in any way."

Bassett says he wrote the original "Lol @ G.L.O.S.S." tweet but Whirr's friend wrote the follow-ups. Bassett says he was trying to get G.L.O.S.S.'s attention regarding "rumors of G.L.O.S.S. saying certain types of people weren't allowed/meant to be at their shows, and not selling merch to certain people based on what type of individual they were." He says he has "nothing against anyone in that band" and "thought that nothing had happened with that tweet .... so I thought that would be the end of it."

Bassett goes on to say that after his friend posted those tweets, his friend texted him "shit is going to hit the fan," and then Bassett "immediately scrolled through our Twitter feed and saw him responding to some commenters on my initial post, and saying things that neither I nor anyone else in the band support in any way." He also tells Billboard that he realized too late he should have removed the tweets immediately.

Bassett stands by Whirr's previous controversial social media posts, "because I didn't take any of it seriously and it was literally just to draw reactions from people who I thought took offense too easily," but he does say this situation crossed a line. He continues:

I understand that in giving our friend access to our Twitter account, we were giving him our 'voice' to the public as far as social media goes, and I have to bear responsibility for that. I would like to commend the scene for coming together on this issue, and taking such quick action when it comes to confronting transphobia. I know that I have a long way to go in terms of earning back the trust of our former friends and fans. I wholeheartedly accept that challenge."

When asked for a quote in response to Bassett, G.L.O.S.S. singer Sadie Switchblade told Billboard, "Whirr can suck my transexual dick now and forever, no one likes you//no one cares. Bye! =o)."

Nick Bassett is also a former member of Deafheaven and a current member of Nothing, who themselves were called out by several people on Twitter for association with Bassett. They posted the following in response to the situation: