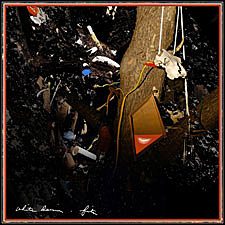 As previously mentioned, White Denim has been replaced by Crystal Antlers on the bill of the July 19th JellyNYC Pool Party. They'll join Magnolia Electric Co. and Dirty Projectors at the free show. The Crystal Antlers released their debut record, Tentacles, earlier this year. Full tour dates for the band are below.

White Denim's Fits came out in the UK in June. That record will see a US release on October 20th through Downtown Records (home of Major Lazer, Santigold, Art Brut, Miike Snow, Spank Rock, Amanda Blank, Justice and more).

Freewheeling stoners, [White Denim] refused to heed the usual convention of making songs sound roughly similar to their recorded versions. What they did instead was play two clumps of music that lasted exactly 20 minutes each (plus 10-minute encore), sandwiching 14 songs together with only the briefest break halfway through. They deserve top marks for stamina, if nothing else, particularly drummer Josh Block, who often stood up to pound out his vicious beats. [Guardian UK]

A series of clips from that overseas trip, with Crystal Antlers dates, below...