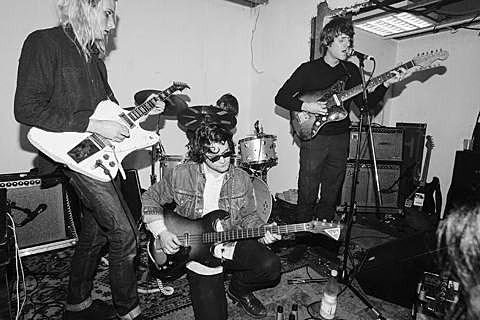 With this weekend's weather forecast looking slightly more hopeful than last's, we should get our first proper Seaport Music Festival show at South Street Seaport's Pier 17 on Friday (6/14). We already knew PAWS were playing but they've just announced that White Fence will be headlining. PAWS are at 7 PM, White Fence play at 8 PM and, like all shows at Pier 17, it's free and open to the public.

As mentioned, White Fence are here for the Northside Festival, playing twice. First, the Panache Showcase on Thursday (6/13) at Brooklyn Bowl with Mac DeMarco and Walter TV. Advance tickets are sold out but there will be limited admission at the door, as well as admitting Northside badges. Then they play a late show Friday at Knitting Factory with Las Rosas and Honey. 11 PM doors for that show and advance tickets are on sale.

White Fence's latest album is Cyclops Reap which is out on Castle Face and can be streamed via Rdio or Spotify. If you've only ever heard White Fence via their (mostly) low-fi recordings, their live show is a different thing altogether. Band guru Tim Presley assembles a usually killer band for much more of a White Fence Rock Experience. Worth catching.

Speaking of free shows at the Seaport, the 4Knots Festival added Hunters to the line-up and a few other new names.