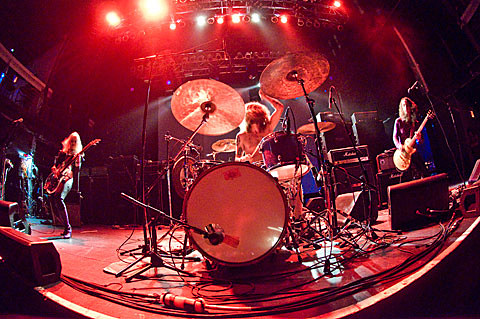 "White Hills' sound has changed a bit compared to its catalog, particularly on the two songs enhanced by Oneida's Kid Millions' drums. Hawkwind's big riffs-in-space sound remains an obvious influence, though at different moments the band veers harshly into abstract Kraut electronics, or, as on "No Other Way," approaches stoner rock with a bass line identical to one on Sleep's Holy Mountain. As with those bands, the occasional thin, straining vocals detract from the overall sound, particularly on the otherwise raging "Upon Arrival."" [Dusted]

White Hills opened for Sleep at Terminal 5 earlier this year.

White Hills released Rough Trade favorite LP H-p1 in June and are already planning a follow-up on Thrill Jockey for early 2012. Similarly, their labelmates Pontiak are preparing for their release of Echo Ono on Feb 21 featuring "Lions of Least" which you can download above. A teaser video for the album is below.

White Hills and Pontiak will head out on a short tour in December including a show on 12/10 at Littlefield. Tickets are on sale. Their full slate of dates and that teaser video, below...