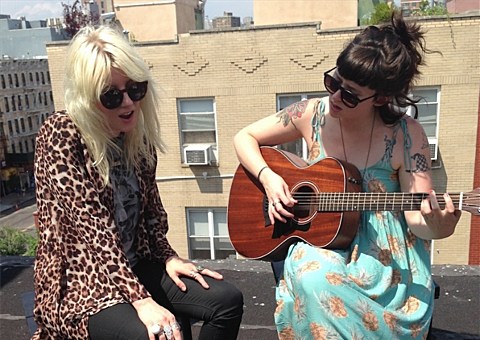 White Lung singer Mish Way and Waxahatchee singer Katie Crutchfield recently teamed up to film a collaborative Noisey Acoustics Session on a rooftop on the Lower East Side. They take on one track from each of their bands -- White Lung's "Wrong Star" and Waxahatchee's "Coast to Coast" -- with Katie on guitar and both of them singing. Waxahatchee's normally-full-band "Coast to Coast" unsurprisingly sounds great acoustic, and much more surprisingly, the fast and heavy "Wrong Star" does too. Watch the videos below.

Waxahatchee recently announced a solo tour where she'll be previewing music from her upcoming record. The tour hits NYC on November 10 at Le Poisson Rouge. Tickets are on sale now.

White Lung are also touring, hitting NYC on September 3 at Glasslands with Mormon Crosses and Flykills (tickets), and also playing NY's Basilica Sound Scape. They've added more dates to their tour too. All are listed, with the videos, below.