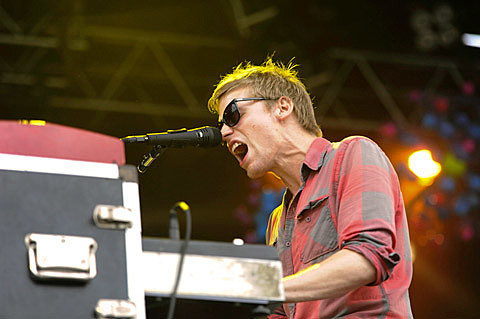 White Rabbits are releasing their third album, Milk Famous on March 6 via TBD Records and on vinyl on March 13 via White Iris. You can grab the lead track, "Heavy Metal," at their website. Despite the track's title, it's a pretty poppy tune, but who knows, maybe it will lead to an unlikely split with Mastodon or something. The album's artwork and tracklist is below.

White Rabbits will tour in support of the album, kicking off with a Philly show on the day of the album's release (3/6) with Tennis, following that with a few dates with The War On Drugs, and eventually hitting NYC on April 12 at Webster Hall, though no opener has been announced for that show yet. Tickets for the Webster Hall show go on sale Friday (1/13) with an AmEx presale starting Wednesday (1/11) at noon.

All dates and White Rabbits artwork and tracklist below... Tracklist:
Heavy Metal
I'm Not Me
Hold It To The Fire
Everyone Can't Be Confused
Temporary
Are You Free
It's Frightening
Danny Come Inside
Back For More
The Day You Won The War
I Had It Coming

* with Tennis
^ with The War On Drugs