This poster was all over Austin this week (VIA) 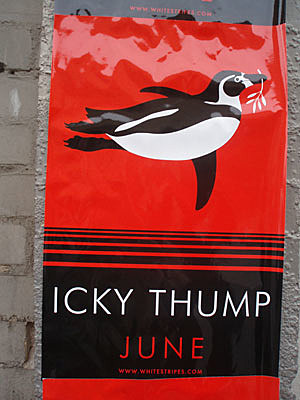 The White Stripes posted this message on their website:

With unbridled enthusiasm for the June release of 'Icky Thump', various publications and web sites have posted a North American tour routing that holds no semblance of reality. Indeed, it looks like their journalists simply found and printed the tour routing the band did in support of their 2005 release, 'Get Behind Me Satan'.

In fact, The White Stripes have yet to confirm their North American routing as of yet. But we are happy to say that it will include all 10 provinces and 3 territories of Canada, as well as the remaining 16 states of the United States the band have yet to play. A few major markets that have been journeyed to in the past will be also be included.

The North American tour will start in the state of Tennessee.

Not surprisingly, Wikipedia says it was NME who posted the wrong information. Here are their real tour dates so far: