Whitehorse at the WFMU Showcase during SXSW (more by BBG) 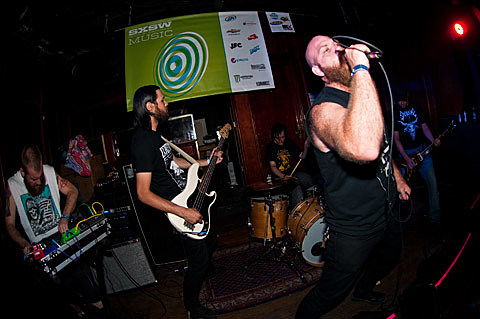 Ever since Whitehorse hit the stages at WFMU during SXSW, I was hooked. The Aussie crew's uber-brutal death-doom was impressive live, but would that cloak of darkness spread into recorded medium? Luckily, Whitehorse's Progression (which we discussed in April) expertly captures the band's dirge and destruction, and now that it's out domestically on At A Loss, you can hear it for yourself. Stream the entire Progression LP below. Totally underrated, and devastating.

The label will release the LP in digital and vinyl form in the coming months. For now you can grab it on CD.

Whitehorse also have a split 7" out with the Body which is sold out at the label.

The Body recently played a show in NYC with full choir. Unlike Whitehorse, they also have a few more dates coming up in the US, including a 7/12 CT show with Harvey Milk (who play Brooklyn one day later):