not to be confused with Fuck Buttons.... 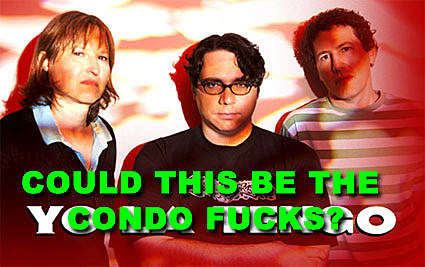 The Condo Fucks are playing Magnetic Field in Brooklyn Friday night (March 28, 2008). It;s one of the venue's last shows ever. Who are they? According to the club they are,

The other band on the bill is The A-Bones. Their show description reads...

Adieu Magnetic Field! Friday night of the final week for a venue that must shoulder much of the blame for us still being together. Say it ain't so!!!! We're extra jazzed to be playing with The Condo Fucks of "We're Moving In!" fame.

And most interesting of all is this message from Matador Records:

Legendary Matador Recording Artists Return To The Stage This Friday

The Condo Fucks are supporting the A-Bones this Friday night at Brooklyn's Magnetic Field. Doors open at 8pm, there's an $8 cover and DJ Phast Phreddie will be spinning. Records, presumably.

At first I thought of Stephen Malkmus because he has three NYC shows coming up, but he'll be in DC Friday night. Now I think it's got to be Yo La Tengo, or at least related to them somehow, but really I have no idea.

Fuck Buttons are playing that night too, but at Bowery Ballroom.