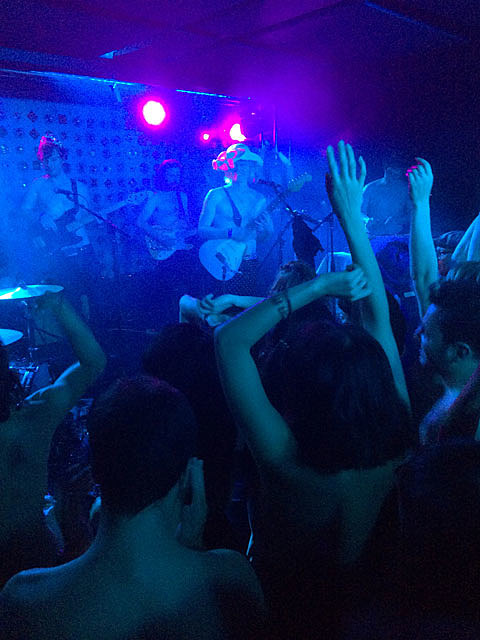 Williamsburg venue Baby's All Right continued their one year birthday celebrations last night with a packed night of shows starting with a triple Mexican Summer-signed bill (part of a two-day celebration for the label that started Wednesday at Glasslands) that began with sets by Weyes Blood (whose new album The Innocents comes out Tuesday, and is streaming below) and Quilt who were one of the first (non-CMJ) bands to play Baby's when it opened last year (they were terrific as usual). The show tripled as a benefit for Shoe4Africa, a charity that promotes health, physical fitness and education in Africa.

The venue was decked out with party store birthday party decorations including balloons, streamers, and piles of glittery confetti. There was also someone dressed up like a baby who was giving out shots. Before Connan Mockasin's set the venue space went dark and stuff was loaded on to the stage. Something was up.

A little after 11 PM, the lights came back on and there was a giant (cardboard) cake on stage. Connan came on stage, as did Perfect Pussy's Meredith Graves who was holding an actual cake that she baked, which was a replica of the giant one. The real cake had a lit "1" candle on it. Connan and Meredith then led a crowd sing-a-long of "Happy Birthday", and then a shirtless Mac DeMarco (who has also played Baby's, but whose next show is at Terminal 5 with Connan) popped out of the giant cake, cigarette dangling off his lip, mic in hand to finish up the song and blow out the candle. Mac and the giant cake were then flung into the audience. 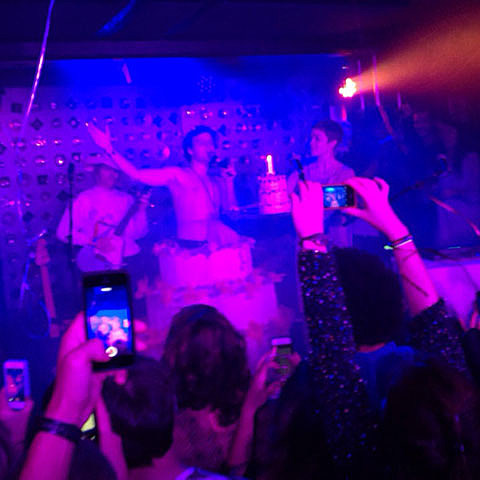 Headlining the "early show" (the "late" Ryn Weaver show started after 1am) was the free-spirited, wavy blond haired Connan Mockasin (not to be confused with Ariel Pink who also recently played an after-midnight show at Baby's). Connan warned the crowd that they hadn't played in two months and the set might be rough, but it was a typical loose, wild set from the New Zealander and his talented band (which included Ariel Pink guitarist Tim Koh for much of it), with as much between-song banter as there was music with friends -- not to mention the Big Baby coming and going, joining the band here and there.

At one point Connan said their last NYC show, which was at MHOW, had  30% of the crowd get naked and asked what we thought of that. At least a few folks, including two girls in front of us, thought that was their cue to whip off their shirts. (They then put them back on, at least for the moment.) Connan also sang happy birthday to Baby's again at midnight before closing with an extended version of "Forever Dolphin Love." (The song is 10 minutes as it is.) For the encore, Connan brought his whole band back on stage, plus good friend Liam Finn and most of his band, plus Mac DeMarco and Kiki of course. Things quickly turned even more interesting as a shirtless Connan, still stuck on besting the 30% naked average, kept encouraging everyone to take their clothes off. All the male members of Connan's band obliged, as did many men in the crowd, and many women as well. Those near the front who weren't sure at first, were urged along by Conanan's keyboardist Sofia Karchi, who jumped into the crowd to help shirts over people's heads. After an improvised cover of "Tutti Fruity," it was back to banter mode. He encouraged the now at least 10% topless room to sit down, where Connan told the still-shirted members of the audience he didn't hold it against them, sheepishly admitting that if he was at a show where the singer was asking folks to get naked, he wouldn't do it. The night ended around 1 AM with a loose take on "Megumi the Milkyway Above." What was supposed to be a 30-minute set hit an hour-and-a-half.

We didn't stick around, but as mentioned, wannabe pop star Ryn Weaver (whose next show is at Bowery Ballroom during CMJ) played her 2nd ever show even later (her first show was at Baby's two nights earlier).

...then the cake and Mac flew into the audience. 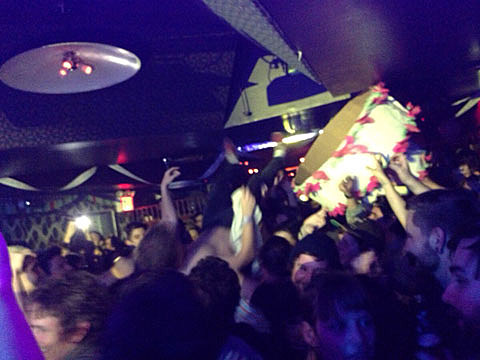 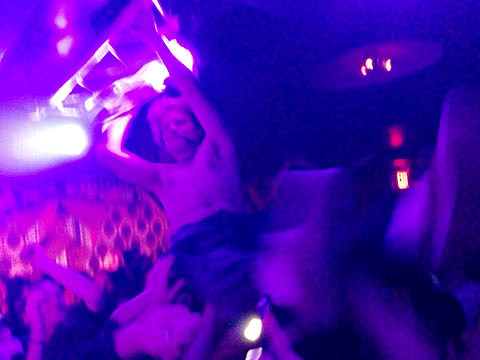 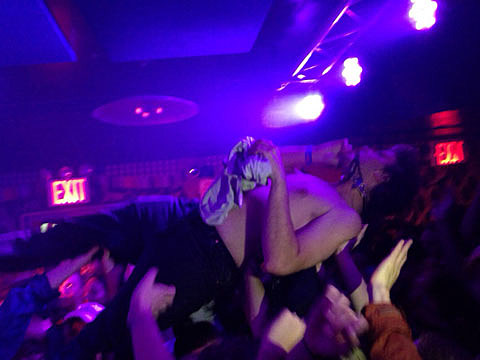 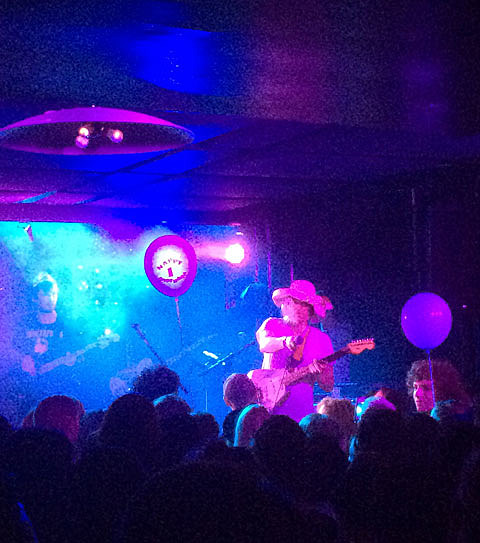 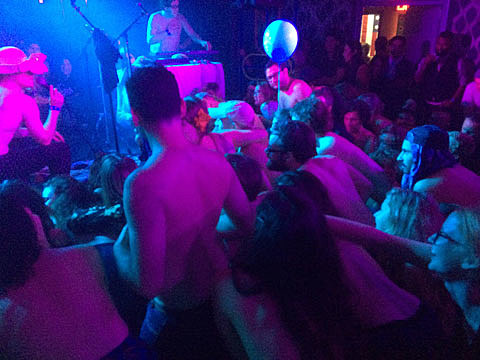 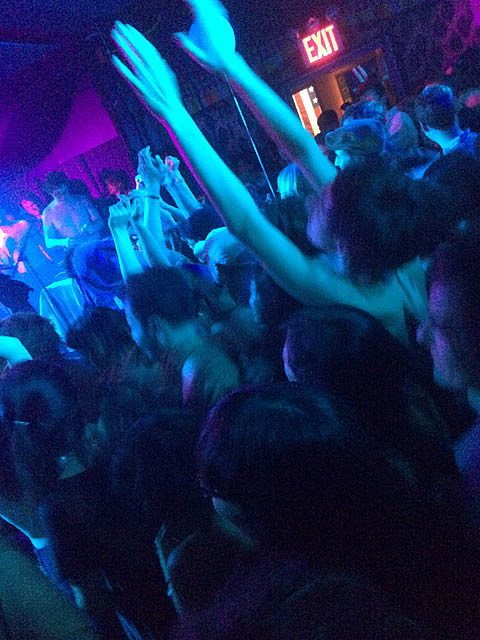 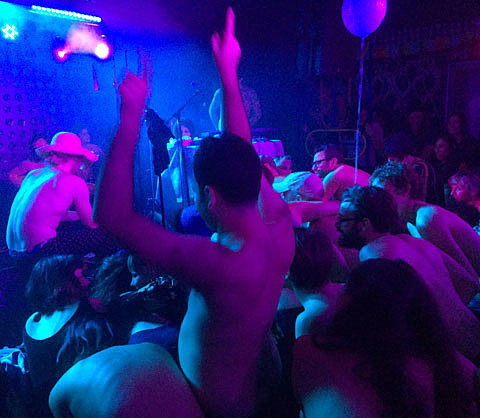 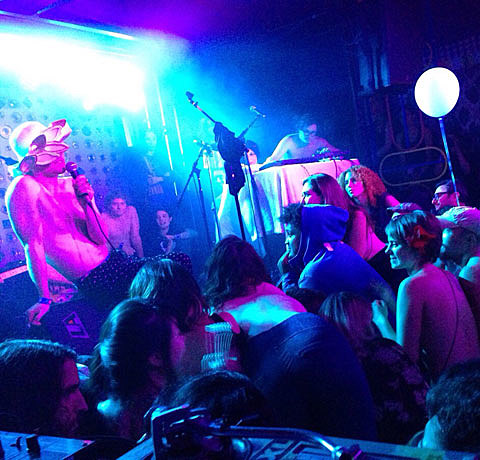 getting weird at Connan Mockasin...got a good portion of crowd to get topless, sit down, chat session right now.