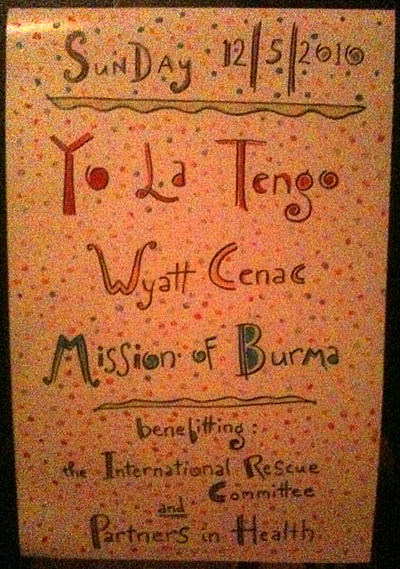 As rumored, Mission of Burma stopped by Maxwell's this Hanukkah to be one of Yo La Tengo's eight openers. A full review and set of pictures from last night's show is coming soon, but meanwhile let's figure out what we've got so far:

So who else will open and/or play with YLT on the final three nights?

Well, "Anonymous | December 2, 2010 9:31 AM" says that Amy Rigby and Wreckless Eric, who played Bowery Electric on November 12th, announced that they'd be at Monday's show "during their show near d.c." That comment was made four days ago. Since then Wreckless Eric made a surprise last minute appearance at Home Sweet Home Friday night. BUT, "Anonymous | December 6, 2010 11:10 AM" says "Tonight's opener is Mofongo, despite the apparent info that Wreckless Eric and Amy Rigby would open. Perhaps Eric and Amy are the encore guests."

note that the proper spelling is: Mofungo

It should also be noted that Bonnie Prince Billy plays Town Hall Wedneday
(tickets are still on sale).

Last night's setlist is below...