"who is this arcade fire band?" - Erik

"Who the hell is Arcade Fire lol" - Hannah

"Well now I will never be able to fall asleep! Thanks Arcade Fire! By the way, who is Arcade Fire?" - Mindy B Littleton

"Who is Arcade Fire? And more importantly, where can I mail the bill when I have a seizure from their performance/ light show? #grammys" - Connelly-Anne Bartle

" Ummm arcade fire, okay?
Yeah we all totally know who those people are." - Chelsey Broussard

"Congrats to Arcade Fire for beating Eminem and Gaga, although I never heard of them before #grammys" - Tebatso Menziwa

"OK WTF, WHO THE HELL IS ARCADE FIRE? THE GRAMMY SHOULD HAVE GONE TO LADY GAGA OR EMINEM OR EVEN KATY PERRY" - Carlos olivares 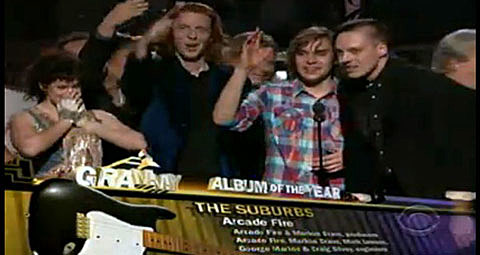 Arcade Fire just won "Album of the Year" at the Grammys. WEIRD.