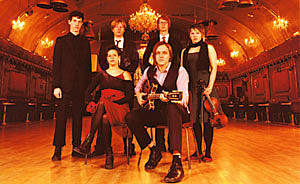 "It's that time again! Today, every stripe of music industry hanger-on (including quite a few from this very website) is flocking to New York City for the megatravaganzapalooza known as the CMJ Music Marathon, four days and nights of bands, schmoozing, panels, schmoozing, films, schmoozing and schmoozing. It's simultaneously orgasmic and maddening, with all these bands you want to see all playing at the same time in all five boroughs and New Jersey, and all these secret after-parties in mysterious Brooklyn lofts, and all these publicists buying you free drinks but not shutting up about The Next Arcade Fire." [Pitchfork]

"Being heralded as the next Arcade Fire could be a touch overwhelming, but Stars share more than just a hometown with the Montreal chamber rock phenomenon." [Guardian]

"If you're in NYC i would like to suggest you go see ManMan tonight at Mercury lounge at 10. They're gonna be the next Arcade Fire ... they don't have songs as good as AF, but the show will be one of those things that you'll be stoked you caught. They're like crazy pirates." [Ultragrrrl] 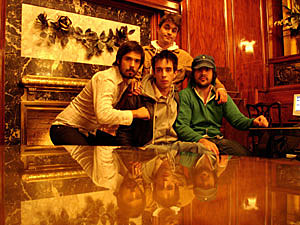 "Almost as long as Funeral has been out, we've heard that Wolf Parade are more or less destined to become the next Arcade Fire. A bold statement, and not one that I'm sure I agree with just yet. Which isn't to say that I don't like Wolf Parade. I do. A lot. I've enjoyed all their eps, and their full length debut, Apologies to the Queen Mary, makes good on the promise of those eps and will likely find a place on many best-of-the-year lists. But the next Arcade Fire? That's just... I dunno. Is it simply because they're from Montreal, too? Because the two bands are buddies? The comparison just seems so arbitrary. Regardless, Wolf Parade are well on their way to proving themselves a fantastic band in their own right." [kop e kat]

"The whiff of Pacific Northwest nostalgia more or less ends there, which is great because we wouldn't want anything else to confuse anyone eager to crown Wolf Parade the next Arcade Fire. "Dear Sons and Daughters of Hungry Ghosts" owes much more to Bowie-in-Berlin than to any of Wolf Parade's Montreal peers. And the echo chamber vocals on "I'll Believe in Anything" would be enough to bar the group from attending Win Butler's fancy-dress tea parties." [Seattle Weekly]

"Everyone’s stumbling over themselves trying to anoint Wolf Parade the next Arcade Fire... something that should make their upcoming gig – as Arcade Fire’s opening act – interesting. But the Parade – despite being a group of energetic kids from Montreal with an energetic stage act – marches to a totally different drummer." [heartonastick]

* Listen to Wolf Parade at Myspace

"AM: It’s funny. I read something about Wolf Parade that said, “Is this the next Arcade Fire?” So it’s like a rating system now. Now if Wolf Parade becomes as popular as [Arcade Fire], it will be, “Who’s going to be the next Wolf Parade?” And that’s not cool. That has nothing to do with rock ‘n’ roll." [said Antonin Marquis of We are Wolves to Prefix]

"PS Wolf Parade is the next Arcade Fire." [Bumpershine] 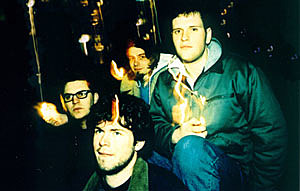 "A blog I visit quite regularly had a recent headline: “Wintersleep – the Next Arcade Fire!?!?!?” Wait now --- are we done with Bloc Party and Wolf Parade already? Wow. I (and Scott Herren, Colin Meloy, and Britt Daniel) realize that so far in 2005 it’s been quite easy to get tired of new albums before they’re even released. But please let’s let things develop on their own course, insofar as they might." [Cokemachineglow (who has MP3s)]

"A quick Google for this Brooklyn five piece (Clap Your Hands Say Yeah) reveals a myriad of views from the gushing to the ‘don’t believe the hype’ doubters. That so many people are proffering an opinion on something that was self produced and limited initially to only 2000 copies says much about their impact. Now in a second pressing it promises to be the next Arcade Fire, a band propelled first by word of mouth and then by frenzied A&R." [soundxsp]

Related: Info on the NEXT ARCADE FIRE album