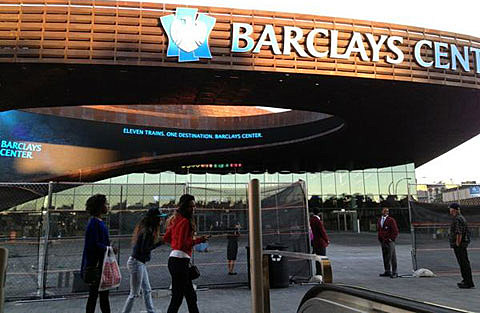 I've often wondered this myself. The NY Post asks:

The embattled UK bank is spending that much cash over 20 years to splash its name on Brooklyn's Barclays Center -- one of the Big Apple's splashiest entertainment venues, which officially opens next week after years of anticipation.

But while 3 million fans or so will pass through the turnstiles of the 19,000-seat arena, none will use a Barclays ATM, none will be pitched a Barclays credit card and none will open a Barclays account.

While the UK finance giant has loads of branches around the world, it has no consumer bank in the US.

And that, in light of the $400 million sponsorship deal, has marketing experts scratching their heads.

"If [Barclays] isn't striving to have a retail presence, it's a big pill to swallow in terms of getting your money's worth out of the arena," said Jim Andrews, senior VP at sports marketing-research company IEG LLC.

Citigroup is paying the same amount of sponsorship cash to have its name on Citi Field, home of the Mets.

But Citi has eight revenue-generating ATMs around the Flushing, NY, stadium, uses ticket offers to customers as a marketing come-on and offers Citi credit cards and other products to fans as they roam the stadium...

More at the NY Post. The Barclays Center opens with eight concerts by Obama's friend Jay-Z. Photo of the new view exiting the subway, via Robyn W.